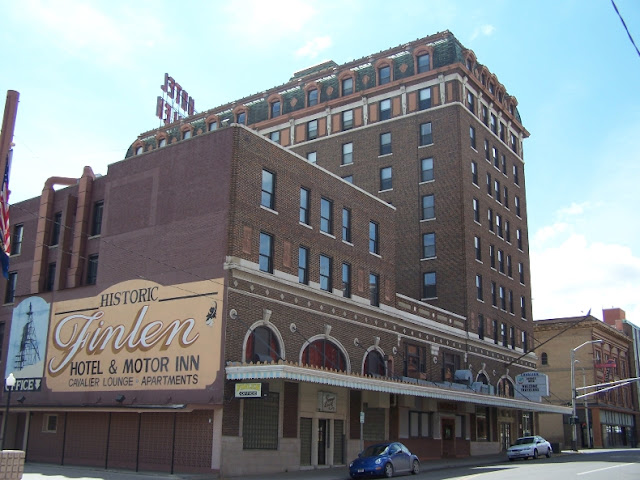 The decade following World War I brought an excess of copper to the world market and Butte suffered a severe economic slowdown. The Finlen Hotel and the Fox (Mother Lode) Theater were the only two substantial structures built in Butte’s business district during the 1920s. New Year’s Day, 1924, marked the opening of this grand hotel modeled in miniature after New York City’s Hotel Astor, a twin-tower building. Because of the economic downturn, the Finlen’s second (eastern) tower was never completed.
The nine-story hotel with a French Second Empire mansard roof was designed by architects Shanley and Baker and constructed by Butte builder Albert Broadland. James Finlen, son of wealthy mining pioneer Miles Finlen, financed the building. In 2013, two floors in the historic hotel are available for travelers, while the rest of the building is residential apartments.

A hotel stood on this corner for many years. The first, the three-story McDermott, was erected in 1889. It was purchased in 1902 and renamed the Finlen; the original hotel was demolished in 1923 to make way for the present building. Rooms rented for $2.50 a night in 1948. Guests in this hotel have included Charles Lindbergh, Mrs. Herbert Hoover, Harry Truman, then Senator John F. Kennedy, and then Vice-President Richard Nixon.