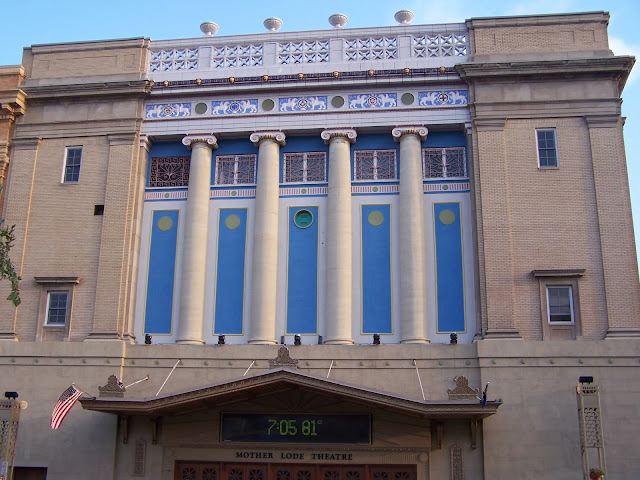 The Mother Lode Theater and the Finlen Hotel represent the only large buildings surviving in Butte from the last construction boom in the early 1920s. With the end of World War I, demand for copper declined precipitously, leading to a declining population and ongoing economic woes that discouraged major building projects in Butte. All of Butte's mines were closed for months in the early 1920s.  This Beaux-Arts structure has four colossal engaged columns with Ionic capitals, lions' heads, decorative iron work, and multi-colored terra cotta highlighting its monumental façade. Art Deco interior features include the proscenium arch, whose openings are covered with fabric. The floor above the main theater contains a large ballroom presently used for set design and storage. Upper floors included offices and wardrobe facilities.

The theater was built as the Temple Theater annex by the Masons, whose temple dating to 1901 is attached to the Mother Lode on the east and Masonic symbols decorate the facade of the Mother Lode. The economic and population decline led the Masons to lease their 1200-seat auditorium as a movie theater (the Fox) beginning in the 1930s. By the 1950s and 60s, it was known as the Bow, followed by a reincarnation as the Fox. About 1983 the Masons donated the structure to Butte-Silver Bow City-County, which immediately leased it to the Butte Center for the Performing Arts, a non-profit group that has managed the site since then. The organization raised more than $3,000,000 for a restoration project completed in 1996, including a new roof, electrical and plumbing refurbishments, a new stage floor, upholstery, furnace, and marquee. In 1997 a lower-level children’s theater seating 106 was added.