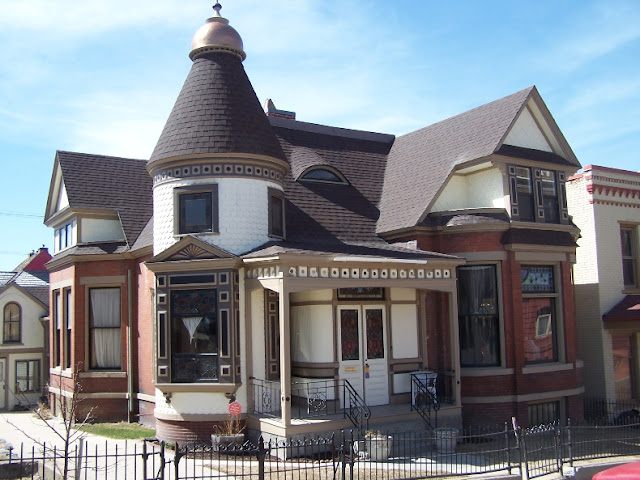 “Next to mining and smelting, litigation is the chief industry of Butte, and highly profitable to the lawyers,” reported a writer in 1901. One of Butte’s many lawyers, Frank T. McBride arrived in Montana in 1879. He and his wife, Rose, and son, Francis, lived in this two-story Queen Anne from 1896 to 1910. The home’s next owner also engaged in a traditional Butte occupation: saloon owner Frank Walker lived here in 1910 with his wife, Bertha, daughter, Georgia, and two boarders, a salesman and a miner. The height of fashion when it was constructed circa 1890, the house boasts many classic Queen Anne features including multiple bays, a round tower, a single-story front porch, roof cutaways, and an eyebrow dormer. These create the random changes in horizontal and vertical planes for which the style is famous. Decorative trim, elegant stained glass, and contrasting wall textures through the use of fish-scale shingles, brick, and stone complete the residence. The front porch was added before 1900, the attached garage before 1916.

From about 1893 to 1896, Charles H. Palmer lived here. He was Superintendent (later, Treasurer) of the Butte & Boston Mining Company. He was also President of the Aetna Savings and Loan Company, with Lee Mantle as Vice President; and Palmer was Vice President of Patrick Largey's State State Savings Bank. Palmer was in partnership with John Coram in various investments; Palmer & Coram were lessees of the Destroying Angel Mine at 35 West Galena Street in 1896, when Palmer lived here at 410 W. Granite. Palmer moved to Boston (1899-1906) but returned to Butte for at least two years, 1907-08, to serve as the general manager of the Davis-Daly Estates Copper Company. During that time, he lived at the Thornton Hotel and the Napton.

Text expanded from historic plaque by Montana Historical Society. Additional resources, City Directories; and a tip from Irene Scheidecker. Photo by Richard Gibson.
Posted by Richard Gibson at 8:51 AM