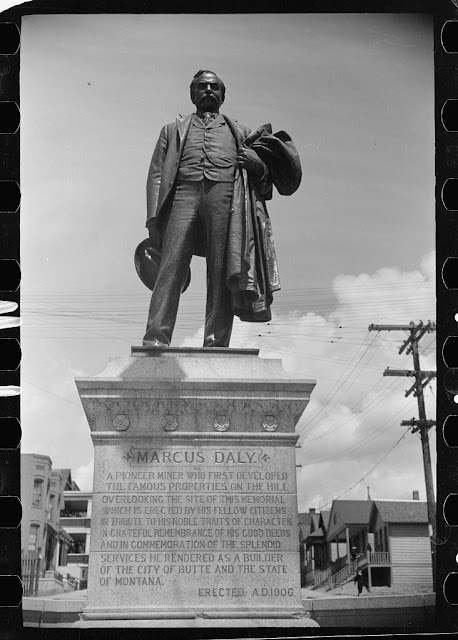 The statue of Marcus Daly, in Park Street at the edge of the Montana Tech campus, celebrates one of Butte’s Copper Kings. Irish-born Daly (born December 5, 1841, emigrated from County Cavan in 1856) came to Butte from Nevada’s Comstock Lode. He worked for the Walker Brothers at the Alice Silver Mine in Walkerville, where he made enough money to invest for himself in the Anaconda Mine, on the Butte Hill. In 1882, with demand for copper soaring to provide wiring for telephones and electricity, Daly’s discovery of the Anaconda copper vein marked the beginning of one of the largest mining companies in the world. Daly died November 12, 1900.

The statue was commissioned in 1902 and completed in 1906 by Augustus St. Gaudens (1848-1907, and also Irish-born), designer of the U.S. twenty-dollar gold piece. The Daly statue was the last significant work of art produced by St. Gaudens; he died about a month before the statue’s unveiling September 2, 1907. It stood in North Main Street near the U.S. Post Office (today’s Federal Building) from 1907 until June 25, 1941 when it was moved to its present location. The move was spurred by vehicles colliding with the statue's base on Main Street, and was sponsored by the Butte Pioneer Club and Butte Citizens Committee, but paid for by Mrs. Marcus Daly.

Photo (of statue when it was on Main Street) by Arthur Rothstein, 1939, Farm Security Administration, LC-USF33-003098-M5 (public domain, from Library of Congress).
Posted by Richard Gibson at 9:44 AM