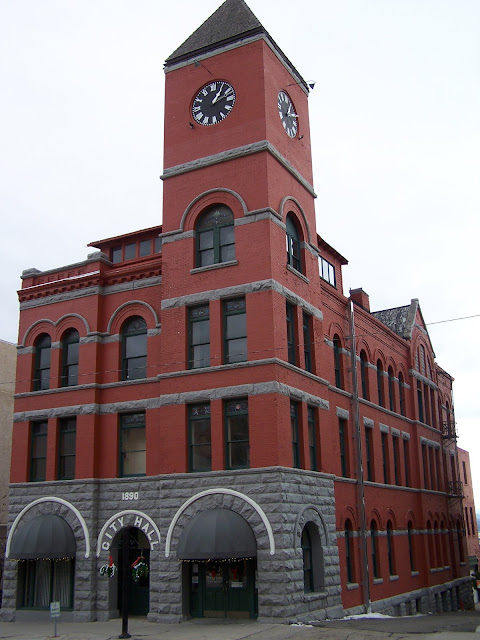 Butte’s exploding population – from about 4,000 in 1880 to 23,000 in 1890 – demanded bigger and better buildings for everything. This is Butte’s second city hall, replacing the 1884 structure at 116 W. Park (now the Jail House Coffee Shop). Mayor Henry Mueller, also an officer of the Centennial Brewery, oversaw the construction of this building. The jail was known as the “Butte Bastille” for its dungeon-like character. No temperature regulation meant that the inmates suffered temperatures ranging from 100°F and more adjacent to the building’s boiler behind the drunk tank, to chilly discomfort in the more distant cells. North of the furthest cells (“dungeon” and “interrogation cell”) police offices occupied the sub-sidewalk space on the north side of the city hall, visible through the hole in the Interrogation Cell. The ceilings in those offices, and in the dungeon, consist of ranks of bricks laid on a metal lattice frame.

Mortared unshaped granite boulders comprise much of the foundation, best seen at the corner of the long hallway along the cells.

The main level of the city hall originally held the fire department. The large arches adjacent to the front entrance on Broadway Street were doors through which horse-drawn fire wagons passed in response to calls. By 1900, an additional dedicated fire station had been built (today’s Archives building, 17 W. Quartz) to help attack the all-too-frequent fires that plagued the city despite a 29-page building ordinance enacted in 1893 that mandated brick and stone construction for most business blocks. The clock tower has been lowered by one section from its original height.

The jail was in use until 1971, when a suspicious (murder? suicide?) death by hanging at the shower stall compelled a decision to begin using the county jail (north of the county courthouse; currently the sheriff’s department offices), which was just 20 years younger but much more modern. The upper floors of the city hall were abandoned in 1977 when the governments of the city and county were merged and all operations moved to the county courthouse on Granite Street. The adaptive reuse of the building as a doctor’s office dates to 1999.