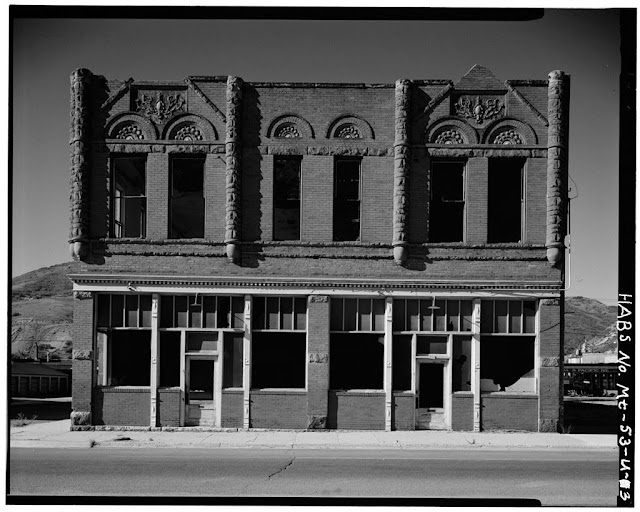 This building was the headquarters for the local chapter of the Ancient Order of Hibernians, an Irish fraternal organization first established in Anaconda in 1885. The A.O.H. auxiliary was officially organized on May 17, 1896 with 45 charter members. Today the Anaconda A.O.H. is one of the two existing chapters west of the Mississippi. The other is in San Francisco. D.J. Hennessy, founder of Hennessy Department Store, Butte, loaned the Anaconda A.O.H. division the money to build the Hibernian Block.

The building was erected in two stages and cost a total of $30,000 to construct. In 1896, a one-story brick structure, measuring 50' x 80' was completed at the southwest corner of East Commercial Avenue and Cedar Street. The building included two storefronts at the East Commercial Avenue facade, with three additional storefronts to the rear on Cedar Street. The second building, expanding the overall structural dimension to 50' x 140', was begun in the spring of 1898 and completed in early January, 1899. Pressed brick with trimmings of sandstone, granite, and terra cotta were used in both portions of this structure. When completed, the A.O.H. Hall was equipped with electric lighting, steam heating, and other "modern" conveniences. This hall was the center of all A.O.H. activities until January 1977 when it was purchased by the Urban Renewal Department of the city of Anaconda for $50,000. In the late 1970s it was under the ownership and supervision of the Community Development Agency. It was demolished c. 1985.

National Register of Historic Places NRIS Number: 98000155
Posted by Richard Gibson at 10:20 AM