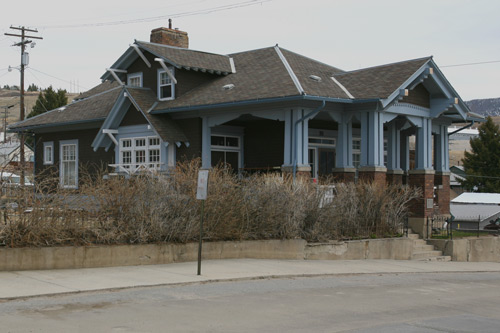 This California bungalow is of primary significance in the Butte National Historic Landmark District because it is the only bungalow-style residence still standing in the eastern part of the district. It was the home for many years of Larry Duggan, a prominent Butte undertaker, and his wife Mary.

Butte miners called the deadly rocks that fell in mine tunnels “Duggans.” The reference was to undertaker Lawrence Duggan, who lived in this house from 1910 until his death in 1939. One of the first professionally trained embalmers in Butte, Duggan opened a mortuary at 322 N. Main in 1895. Perhaps he chose the location for its proximity to the Miners Union Hall and the mines. Behind the house was Duggan’s heated sixteen-car garage, where he kept his hearses. Active in Irish fraternal organizations, the Workingman’s Union, and local politics, Duggan served three terms as sheriff during the 1920s. Vigilant against the Ku Klux Klan—whose members he threatened to shoot “like wolves”—Duggan was likely more tolerant of bootleggers and moonshiners. Butte retained its reputation as a wide-open town throughout Prohibition.

The residence was designed by architect Herman Kemna, and cost approximately $6000 to build. An article in the Butte Miner newspaper of July 3, 1910, describes the house thus: "In its many distinctive features lies the secret of the bungalow's attractiveness. Not the least of which is the flower oriel window facing the west, which is deeply recessed in the dining room and gives the bungalow a flavor of the Dutch architecture. There is a pleasing and decidedly novelty in the design of the front windows as well. These open on a great wide, well-shaded porch, the floor of which is of brown paving brick. This, together with the concrete steps, insures a cool porch in the warmest of summer weather."

Posted by Richard Gibson at 9:27 AM