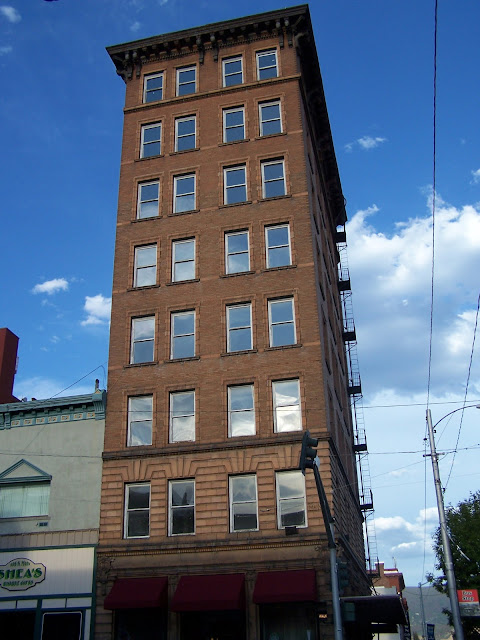 Research indicates that this eight-story building is the second skyscraper (steel girder construction) west of Minneapolis and St. Louis (the first is the Call Building in San Francisco, erected in 1898). The building measures 58 by 28 feet and is about 90 feet tall. The basement, accessed through the public stairwell into the vaulted sidewalk, was the best-preserved sub-sidewalk storefront in Butte. Vaulted sidewalks were supported by brick or granite walls and floored with dirt or planks and contained grids of glass prisms to focus light into the vaults (a few survive on the South side of West Broadway Street near the Leggatt Hotel). The space here, restored to the 1928-69 Hirbour Barber Shop, was initially home to the Salvation Army, followed by a courier company (c. 1905-1928). The “secret” back room provided access to the rest of the building and was used as a private drinking establishment for the barber’s customers as recently as the 1950s; it was probably established during Prohibition at about the time the barber shop opened in 1928. The restored barber shop was removed in 2015 to make way for renovation of the basement for other uses.

The tower contains a cast-iron staircase as well as cast iron window casements on the ground floor. Emanuel Hirbour, who died before his building was finished, is memorialized in the terra cotta “H” emblems on the street-level façade. Although the two-story buildings to the north were present when the Hirbour was built, the north wall of the tower is essentially windowless, presumably in anticipation of later high-rise construction there. At least three different advertising signs occupied that wall over time, but all are faded to invisibility today. As was typical in Butte, the first floor was devoted to retail and the upper floors were offices.

In 2012-13, the building was renovated to create condominiums on each of the upper floors.