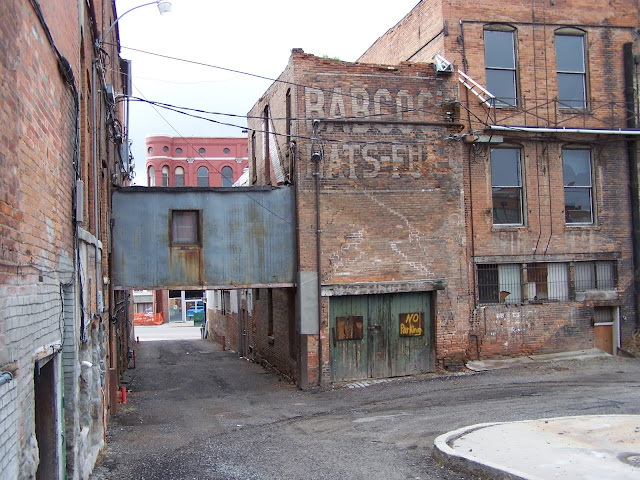 
The T-shaped alley west of North Main between Broadway and Granite has been there with that geometry since before 1884. This three-story alley building, at the corner of the T, is connected by an overpass to 117 N. Main Street, part of the Dellinger Block. 117 N. Main (the first floor, north side of the Dellinger Block), the overpass, and the connected alley building all were built before 1884 as well.

Various stores have occupied 117 N. Main Street, including a grocer, a hardware store, and men’s clothing stores. One of the first clothiers was Babcock’s; the name was superseded by his successors, Babcock’s managers Smith and Mattingly in 1900, and by Ignatius Mattingly alone from 1904 until 1925. The “Babcock’s” ghost sign here is pre-1900; the barely visible “Mattingly’s” over the garage door dates to the 1904-25 period.  The overpass led to the second floor of the alley building, which early maps always label as storage.

The ground floor was always essentially a garage. The third level shows on old maps as “sleeping rooms.” The access to the top level was by a stair on the outside (east face) of the building, marked by the white stripe on the photo above. The door to that stairway was in the south side of the overpass, which was variously tin-clad or iron-clad over time.

This building survived two fires, in 1889 and 1978, that destroyed buildings in what is now the parking lot to the north.

The outside stair was removed years ago, leaving the third level inaccessible until 2011 when a new inside stair was constructed to provide access for tours. The alley building never had electricity, but both the second and third levels still hold the brass fittings for multiple gas lights, and both floors, small though they were, each had two stoves.

The top level is papered in fancy wallpaper made by the Allen-Higgins Company, a high-end wallpaper manufacturer in Worcester, Massachusetts. The Allen-Higgins Company started in about 1898, and there are two layers of older paper beneath their product. This space seems to have been a rather nice, double room, with two large closets which are also fully papered. While it is impossible to prove, it seems likely that the legend of this being a high-end two-crib brothel may be true; the wallpaper seems to be fancier than one might expect for a man’s sleeping room.

This building is part of the Dellinger tour with Old Butte Historical Adventures.