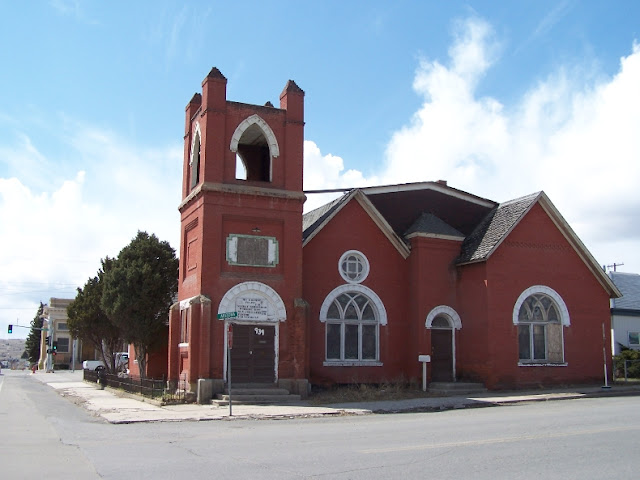 The Grace Methodist Episcopal congregation was organized in 1888 to serve South Butte, although a mission in South Butte had begun about 1879. They erected their church on the northwest corner of Arizona and Second Streets in 1889. Montana's second state governor, John Rickards (served 1893-97), was on Grace's initial board of directors. In 1910, membership was 140 under Pastor W.H. Pascoe, who lived at the church.

Over time, the address scheme changed here, from the 200 block of Arizona when it referred to the separate community of South Butte, to 945 and 939 South Arizona after the address became part of the Butte grid. The original 1889 church was significantly expanded and modified in 1902, including the addition of the corner spire.

Reformer Carrie Nation spoke here during her Butte visit in January 1910. Grace was one of the churches where Mrs. Nation did “a land-office business” selling her books and hatchet pins, although when she was on the streets of Butte and in saloons, her welcome was more ridicule than enthusiasm. After her lecture at the Grace Church, she marched up Arizona Street to the red-light district where she pleaded with working girls to give up their “life of shame,” but she left the A.B.C. Saloon (corner of Wyoming and Mercury) to the orchestra playing “What The Hell Do We Care.”

In 2013, the church is vacant and privately owned, with restoration in the offing.