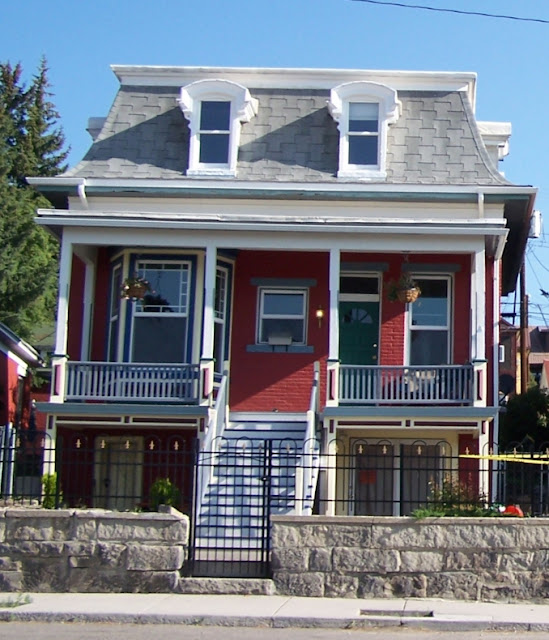 The elegant Mansard roof on this home marks it as French Second Empire style. It was constructed as a two-story duplex home before 1884. In the early 1890s tailor Walfred Hoover lived in the western unit (then addressed 311). He worked for Henry Jonas, a merchant tailor with a shop at 126 North Main, where part of the Hennessy Building stands today.

Patrick Conlon, proprietor of the Arcade Chop House, purchased this house in 1889. It is not clear whether or not he lived here initially, because his address is listed at 518 North Main at least through 1900, but from before 1910 until his death Conlon lived in this house. He died at home here May 17, 1921, after a short illness, at age 83. Conlon was close friends with Marcus Daly, James Murray, John Maguire, and other prominent Butte pioneers.

Patrick Conlon was an Irish patriot and member of the Robert Emmet Literary Association in Butte, a revolutionary organization fighting for Irish independence. He was born in County Mayo, Ireland, in 1838, and emigrated to the United States in 1853 at age 15. He traveled by steamboat up the Missouri to Ft. Benton, arriving in Montana July 4, 1864, and came to Butte in 1878. He was a founder of the Butte Branch of the Irish National League of America in 1883. Conlon donated $20.00 in 1885 to the Parnell Fund, a response to Charles Parnell’s visit to America promoting Irish home rule. That was at a time when $20 would have bought at lest 40 really good dinners in a high-end restaurant.

The Arcade Chop House was a restaurant on North Main, in existence by 1878 when John Mann was proprietor. Conlon apparently managed it through most of the 1880s, until 1889 when Henry Mueller & Co. took over. Mueller held various offices with the Centennial Brewing Company and was Butte Mayor in 1891. The Arcade Chop House addresses, variously 209 or 269 Main, and 31 North Main, probably reflect the same location, with the changes due to alterations in the address scheme. I believe the location was in the middle of the block between Park and Broadway, on the west side, where the 1891 Avalon Block (former print shop) stands today. That was the 200 block in the 1880s. It is possible that the shop began in a building nearer the corner of Broadway (where the D.A. Davidson building is today) and moved a few doors south by 1889, but in any case the original building or buildings that housed the chop shop are gone today.

This house was restored about 2005. It suffered minor damage in the 2008 fire that destroyed 307 West Granite, next door to the east.