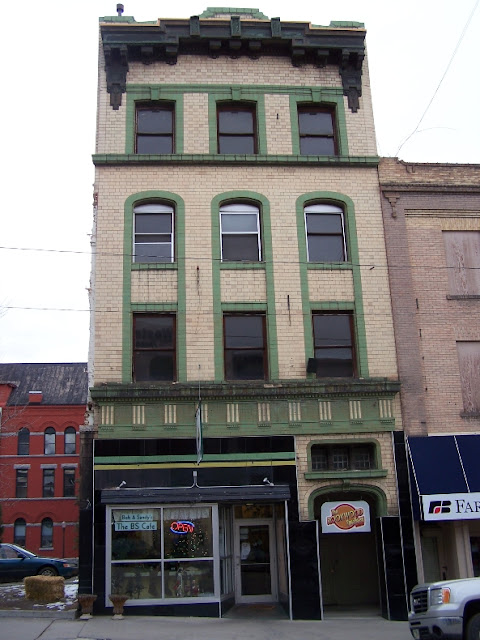 James Pratt, proprietor of the Red Boot and Shoe Company, spent $30,000 on the construction of this hotel/rooming house in 1912, replacing a building destroyed in the Creamery Cafe fire. The shoe company occupied the ground floor space through the 1930s. Large display windows and a Tudor-arched entry, designed to entice customers and guests, enhance the ground floor. Green tile embellishes the façade and caps the unique copper-clad cornice. Inside, a wrought iron staircase with marble treads leads down to the hotel lobby. Marble wainscoting recalls its once-elegant hospitality.

The ground floor also housed “The Town Talk Tailor” for several years in the early 1930s. The lodging house above, renamed the La Salle Hotel in 1938, had more than forty-five rooms. During Prohibition from 1919-1933 the hotel’s thirty working-class lodgers perhaps enjoyed the hidden saloon tucked beneath the sidewalk. Known to historians but rediscovered in 2004, the clandestine establishment in the basement had all the trappings of a period speakeasy including a secret entry and two-way mirror. The room continues the architectural motif with decorative Tudor arches spanning the ceiling. Elaborate support columns sporting carved griffins, terrazzo flooring, dark hardwood wainscoting, remnants of stained-glass skylights, and marble trim expose a piece of Butte’s once-spirited underground. We know of one raid here, by Federal agents in March, 1928, when Curly McFarland was arrested.

The residential hotel portion of the building was effectively vacant by the late 1980s. A ground-floor restaurant continues here in 2013, but apart from the speakeasy museum in the basement, the rest of the building is vacant.