By Richard I. Gibson

Patrick Deloughry, a carpenter at the East Gem Mine, built this house to replace a pre-1888 single-story brick veneered home that stood here. Deloughry lived almost across the alley behind this site, at 310 West Quartz Street.

William Waugh, a lawyer, and Jeanne Stewart, an art teacher, lived here at least from 1928 until 1937. After World War II, the house was converted to apartments, and in 1948-49 at least 13 people lived in this home. They included Pearl Rowe (widow of James); Lois Johnson (dictaphone operator for the Texas Company, dealer in oil and lubricants); David Bell (miner); Corrine Gutz (widow of Walter, she was head of the ACM Publicity and Information Office); Ole Nelson (steward, Eagles Club); Martin Makeli (student); Mable Fletcher (practical nurse); Kate & James Rockefeller (he was a clerk); Margaret & Henry Freudenstein (another clerk); William Dagg (an announcer); and William Graham (cook at the Finlen Hotel). 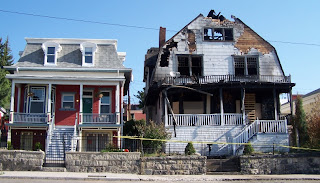 In 2008, ten tenants were occupying eight apartment units when a smoldering cigarette started a fire that destroyed the building on July 29. Estimated rebuilding costs of more than $500,000 were not covered by insurance, and the building was demolished.