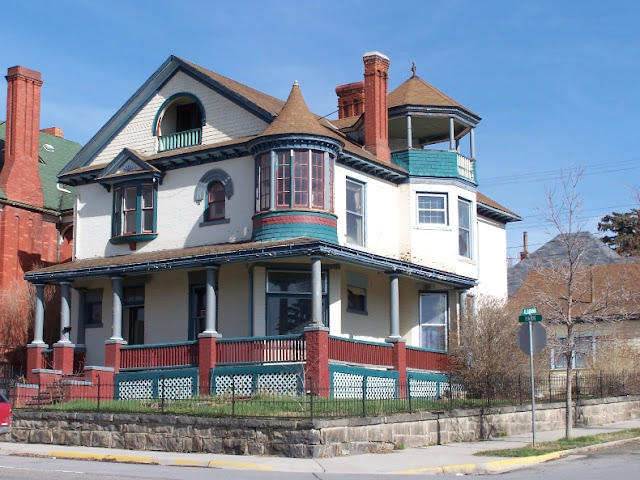 The Queen Anne style is beautifully expressed in this fashionable “gay nineties” residence of Arthur H. Mueller, longtime president of the Centennial Brewing Company. Built in 1895, it was also home to Mueller’s in-laws, police court judge James C. Sullivan and his wife, Margaret. Two turrets, a wraparound porch, oriel and polygonal bay windows, and a gabled roof accentuate the asymmetry that is characteristic of the style. Scrolled brackets, Tuscan columns, and arched windows with stone sills enhance the brick-veneered façade, while an ashlar retaining wall topped by a vintage iron fence encloses the prominent corner lot.

Original interior appointments such as elegant mahogany stairwork, woodwork, and columns rival those found in the mansions of the famed copper kings. Pocket doors and the original iridescent amber glass and brass lighting fixtures grace the formal first-floor rooms. A beautiful hand-painted mural in the dining room depicts a river scene so skillfully executed that the water appears to flow through the room and out one wall.

A.H. Mueller built the Mueller Apartments in 1917 as an investment.