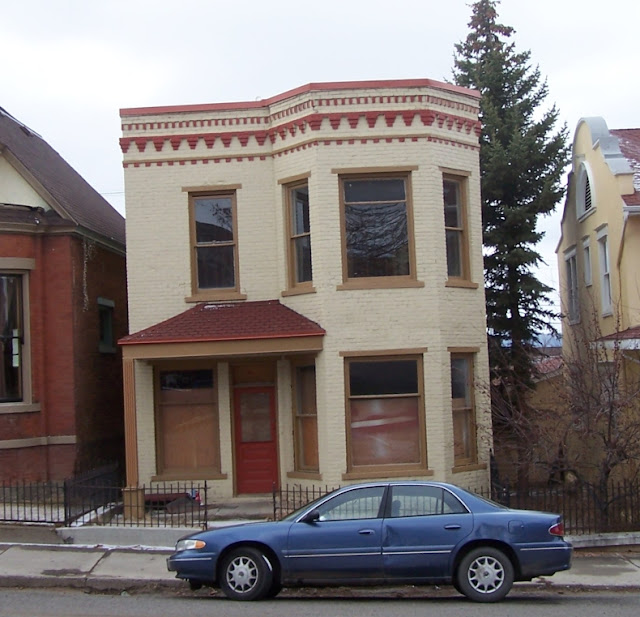 This small home, flanked by much fancier houses on both sides, was built as an investment by Undertaker E.H. Sherman as a brick-veneered one-story house about 1890. Sherman lived at 107 West Quartz at the time, a location today in the County Jail parking lot. Bella Crangle, the long-time stamp clerk in the Butte Post Office, lived here with her family in 1902. In 1908, the second story was added by long-time owners, the Alex Gray family; Alex was a blacksmith. Together, the three adjacent houses constitute an excellent example of the close juxtaposition of diverse housing styles in Butte, even in the relatively upscale near West Side (Hub Neighborhood).

In the late 1920s, Winnie Gray, widow of Alex, lived here with her son Alex Jr. The son worked as a mechanic at the Atlantic Garage, 45 West Galena (former location of Quarry Brewery, 2007-11). The garage was managed by Ernest Schwefel, who lived two blocks west of the Gray family, at 618 W. Granite with his wife Alice and sons Donald, Ernest Jr., and William. Winnie owned and rented the house into the 1970s, when Butte Archivist Irene Rice (Scheidecker) was a tenant.

This property was sold by Butte-Silver Bow County in 2006 under the developer’s packet process for $500. The new owner did major rehabilitation on both the exterior and interior; the house was vacant until 2013 when a new owner acquired it.