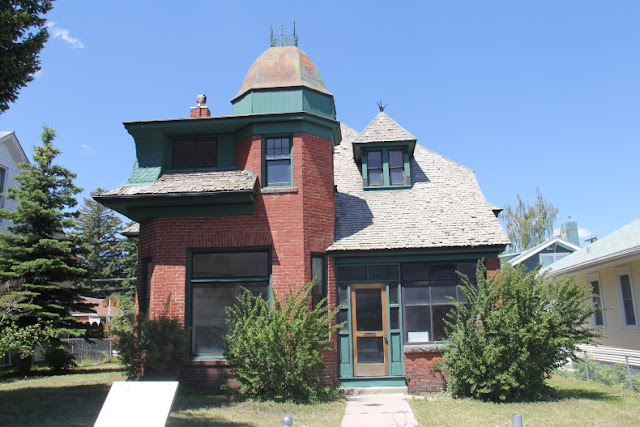 Intricate, original ornamental metal cresting caps the dome on the octagonal tower of this handsome 1,514-square-foot residence. Its eclectic architecture combines elements of the Queen Anne and French Second Empire styles. A partial Mansard roof at the northeast corner and a front window with unusual stone quoins and brick surrounds reflect the flamboyant tastes of the late Victorian era. The tower retains its original, charming multi-paned cottage window.

Albert MacCallum (MacCallum & Cloutier Grocery) built the residence as a rental property in 1895 and sold it in 1904 to miner, politician, and businessman Dennis Roach. Roach came to Montana from Indiana in 1889. The firm of Roach and Smith offered billiard tables, a confectionery, flowers, fishing tackle, sporting goods, cigars, and sundries. Roach and Smith, one of Anaconda’s longest established businesses, still exists as a wholesale distribution firm. Dennis Roach served as county commissioner and as a representative in the Montana legislature. After Roach’s death in 1925, his widow Maude remained at home here for more than thirty years. The porch was enclosed and an addition built in the 1940s.

The Roach's daughter, Katherine “Kash” Felt, a prominent and well-loved Anaconda matron who served on many local boards, converted the residence into classrooms where she taught kindergarten. She died in 1999 at age 95, and the family retained ownership of the property into the twenty-first century. It had stood vacant for many years until it was purchased in January 2013.  Extensive repairs and restoration are in progress in 2013.