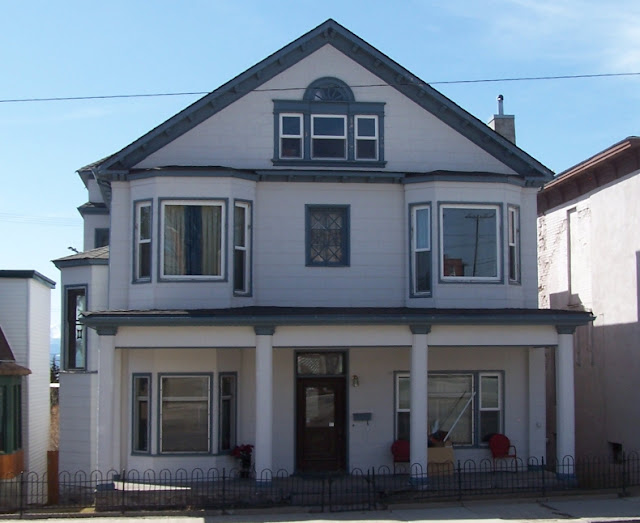 John G. Hammer, bookkeeper with the John Caplice Company, built this house as a one-story residence before 1885; the early address was 163 W. Granite. Hammer established and became manager of the Butte Sewer-Pipe & Tile Company in 1889, and was successful enough that in 1899 he added the second story to his home. He continued to manage the company and live here until 1912, when he moved to Portland, Oregon where he purchased an $11,000 home at 530 East 17th Street North.

In 1910, Hammer’s daughter Florence and her husband Terry John also lived here. Florence worked as a bookkeeper for the tile company until at least 1920. Another daughter, Alberta, married William Siderfin, manager of W.A. Clark’s interests in Butte. John Hammer was secretary of the Butte Chapter of the American Institute of Mining Engineers in 1887, when W. A. Clark was its President. Hammer was born in Saxony, Germany, about 1849 and died about 1913. Julia, his wife, was prominent in Portland social circles and died there July 1, 1935.

In 1907, Hammer’s brick plant south of Silver Bow Creek was producing 5,500,000 bricks per year. The clay was mined locally (fireclay was mined near Whitehall after 1902), and the main plant was located west of Montana Street, west of the cemeteries south of the creek. The tile shop stood at Oregon and Second Avenue.

In 1928, Mancel (sometimes given as Myrle) Larson was living here. He was a shift boss for the Anaconda Copper Mining Co. As the Great Depression began to take its toll, large houses like this one became boarding houses. Larson began to take in boarders about 1935; in 1937, when he worked at the Emma Mine, his tenants were Maybelle Baird (widow of James), a stenographer for the Montana Service Corp., a dealer in dairy products; Katherine McDaniel (widow of John), a nurse, and her daughter Marie, a student at Butte Business College; Maud Maloney (widow of William); and Helen Curtis (widow of Charles), head of the County Child Welfare Department.  By 1940 all but Baird were still living here, and Walter Thomas; Ray and Lumina Rowan (a salesman and cosmetics representative, respectively); Wendell and Ardell Peck (he was another salesman); and Violet Blecka all called this house their home as well.