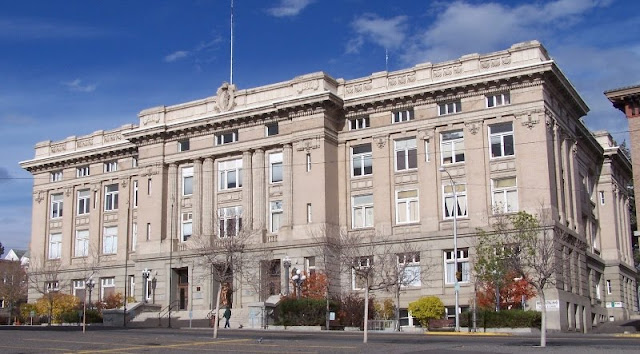 This is the second Silver Bow county courthouse to occupy the corner of Granite and Montana Streets. Built in the Beaux-Arts style and faced in part with 70-million-year-old sandstone from Columbus, Montana, the building cost about $385,000 – nearly as much as the state capitol in Helena.

Basic construction is steel frame. Interior columns contain ducts designed to allow fresh air flow into the building. Rotunda door frames are granite, painted to resemble wood—one of many details that addressed Butte’s persistent fire hazard. Pink railings surrounding the rotunda on upper floors are cast iron with scagliola plaster coatings— colored and polished plaster designed to resemble marble. Genuine marble is found in the main interior steps, rest rooms, and decorative elements throughout the building, as well as in the pendentives supporting the rotunda dome.

Two years after its opening, the courthouse served as barracks and headquarters for the militia that came to control Butte under three months of martial law in the wake of the dynamiting of the Miners Union Hall on North Main Street in June 1914. In September 1914, a Gatling gun was set up on the courthouse steps and a 5,000-candlepower searchlight was placed on the courthouse roof. The steps have seen visitors such as Eamon de Valera in 1919 and Franklin Roosevelt in 1932.

In 2012 the courthouse celebrated its centennial with a grand ball and other festivities.