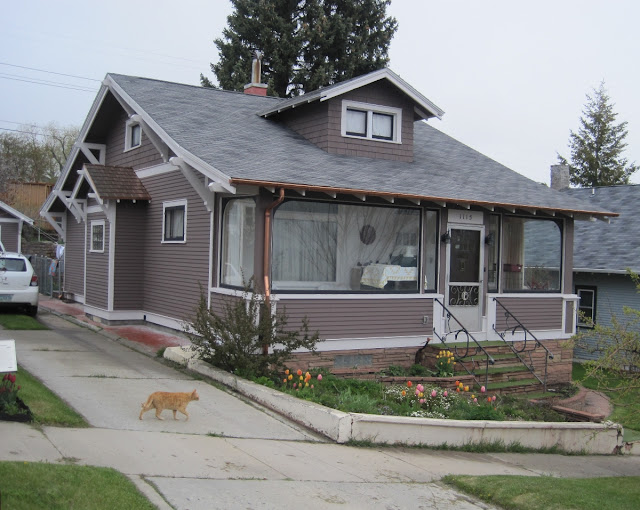 New York capitalist Leonard Lewisohn—a principal in both the Boston and Montana and the Butte and Boston mining companies—invested heavily in Butte even though he never lived here. Among his other business ventures, he and business partner Simon Jacobs platted the Waukesha Addition in 1891. The street named for his family was alternately spelled Lewisohn and the more easily remembered Lewishon—sometimes on the same map. Many of the neighborhood’s homes went up between 1900 and 1915, including this one-story bungalow

This Craftsman bungalow was built about 1915 as a one-bedroom house. The present back bedroom was the kitchen, the closet was the pantry, and the present kitchen was the back porch. This back porch had stairs which lead down to the basement. This is a one-story rectangular bungalow residence with a basement apartment, and a dormered gable roof which flares in the front and rear. The original siding was pine lap boards, which were covered over in the early 1970s by white, wide, steel siding and yellow awnings that began to peel. The steel siding was removed in 2009 and cedar lap siding was installed along with replacement knee braces (similar to the original), the rafter tails were re-exposed and the cedar shingle gable ends were restored. Most of the original windows have been replaced but the original sizes were retained. The glass enclosed porch was added in the 1950's; the original porch was open. The house has two rectangular bumpouts, the one on the east with the shed roof is original but the one on the west with the gable roof was probably added in the 1950's when the bathroom was remodeled. The copper shingles on the small side roofs are a tip of the hat to the copper mining heritage of Butte. In its 95 years on Lewisohn, the house has only had five owners. It has been extensively remodeled through the years but retains much of the historic charm.

In August 1925 the house was purchased by Frank and Lillian Stanaway. Frank and Lillian (Penhall) were married in Butte July 14, 1923. Lillian was a native of England, daughter of William K. and Annie (Inch) Penhall. Frank started work as an office boy at the Butte Water Company, and eventually became a bookkeeper for the Montana Hardware Department of the Anaconda Copper Mining Company. They moved to Billings in 1936.

Daniel and Agnes Callahan owned the house for the next 45 years. He was a pipefitter in various Butte mines and she was an office assistant in doctor's offices (Dr. Donovan, Dr. Morse and Dr. LaPierre) and later worked in the courthouse. Dan Truckle and Phyllis Hargrave, both geologists, bought the house in 1985. Dan died in 2003, and Phyllis is the owner in 2013.