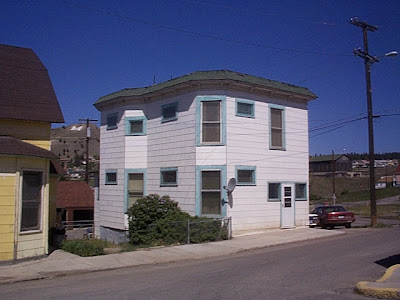 
301 North Crystal was built in 1898 by prominent architect Charles M. Prentice. He was initially in business with Joseph S. Chevigny, but worked on his own later. He became mill foreman for the M.J. Connell Lumber Co. in 1895. The Prentice family briefly left Montana for California in 1899, but they returned by 1900, and Charles, his wife Celia, daughter Lula, and son George were at home here at 301 N. Crystal until at least 1906. Prentice also lived at 600 W. Quartz, next door to 301 N. Crystal, and at 208 N. Clark (formerly Columbia Street). He was known for his homes and apartment buildings with “inventive corbelling and interesting fenestration patterns.” Other examples of Prentice’s work are 206-212 N. Clark and row houses at 209 N. Idaho. Prentice also designed the east wing, bay, and porch for the M.J. Connell house at 301 W. Granite St.

The original polygonal wood frame structure is largely unchanged. Alternating panels of full and half windows include beveled, etched, and stained glass in some of the half windows. Stained glass is also found in three upstairs transom windows, as well as in a basement door. Interior wood is mostly painted wood grain, although some has been overpainted. There are decorative brackets under the eaves of the flat roof, and a short hipped roof provides a modification to the typical flat-roofed Italianate style, a variation that is rare in Butte. The garage is probably not original, but is a relatively early addition likely dating to the 1910s to 1920s. The house is set into mine tailings derived from the Silver King mine shaft that was located to the north, where Cheyenne Park is today. Tailings can be seen in the basement in the wall beneath the stairs.

The house was home to the Panisko family from 1950-2003. Owner Frank Panisko was a retired circus clown, working with Emmett Kelly at the Ringling Brothers Barnum and Bailey Circus. In Butte, he worked as a pump operator at the Leonard Mine. Some long-time Butte residents refer to the home as the "Clown House" because of Panisko's connection with the circus. He had a booth at Columbia Gardens and at festivals in Butte for many years. 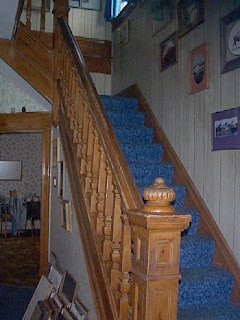 Prior to the Panisko family, residents included