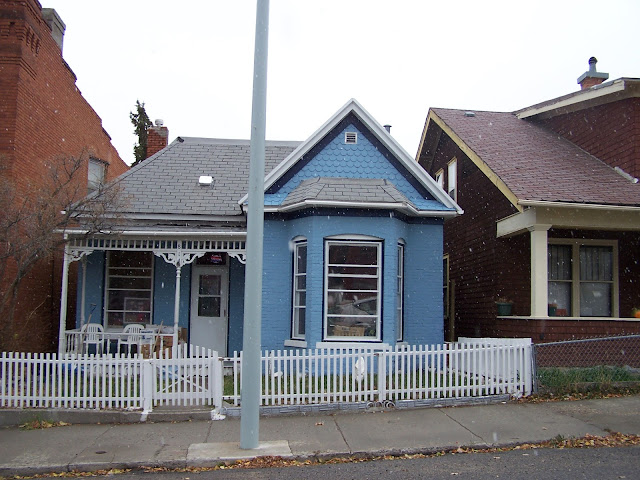 This miner’s cottage is typical of the style common on Butte’s West Side. Square footage is about 1,250, and there is a basement. Class distinction is evident on West Granite Street, with little homes like this one on the south side of a street (facing north) and mansions and mini-mansions on the north side where they could catch the warm winter sun. This was Myron Brinig’s home in the early 1900s.

Myron Brinig was born in Minneapolis in 1896 and lived in Butte about 1897-1914. He began his career as a writer in New York City in 1918, and moved to Hollywood as screenwriter. He lived in Taos, New Mexico from 1934-77, and died in New York at age 94 in 1991. His best novels are about Butte and Montana’s turbulent years – Singermann, inspired by his father, a Jewish Romanian immigrant; Wide Open Town, about an Irish miner; and The Sisters, a Montana family story focused on the prosperous middle class. The grocery story at the corner of Alabama and Granite (now apartments), a block from the Brinig home, served as the setting for much of the novel The Sisters, made into a 1938 film starring Bette Davis and Errol Flynn.