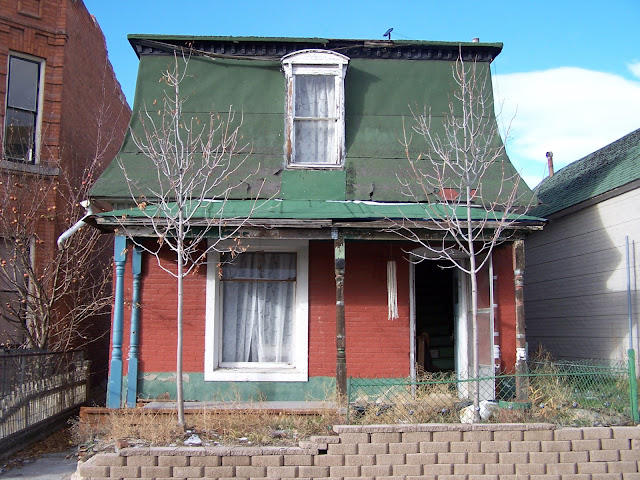 Wood frame buildings with a brick veneer began to be constructed in Butte during the late 1870s as a reaction to major urban fires. Brick and the use of formal architectural style are indications of Butte’s transition from a temporary camp to an established city.  This building is an early example of this transition.  It was almost certainly constructed in 1883, the date of the newspapers used to span the gaps in the interior sheathing boards.

The mansard second story space and arched projecting dormers identify this refined structure as French Second Empire. The presence of separate rooms and connecting hallways on both levels suggest that despite the small size, this building was probably designed and initially used as a small hotel or boarding house. It had a relatively large one-story kitchen at the rear, and is located on a slight rise along what was once an important travelers’ route into Butte along Washington and Idaho Streets. South of this building were several livery stables and associated businesses catering to travelers, and the adjacent property to the north has a barn on the alley. The building is near what was, in 1883, the southern edge of the most densely built-up part of Butte. Nearby, both Idaho Street Alley and Washington Street Alley had a predominance of alley-addressed housing that faced these narrow corridors, though demolition has greatly reduced their numbers in recent decades. A small two-room miner’s cabin with independent doors still exists facing the alley. 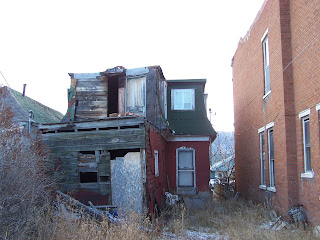 The construction of the boarding house is similar to later construction techniques, but with some variations, the most significant of which is that the wall studs can best be described as 2x3 instead of later 2x4s. The foundation is mortared stone rubble that was built upon by wood plate, 2x3 studs and 1 x plank sheathing on both sides. An air space was left between the sheathing and the bricks, with the bricks periodically anchored to the sheathing with mine spikes. All of the joists are rough cut and were wide spaced, with wide-plank open-joist bottom floors. The gaps in the horizontal sheathing boards were closed with pasted newspapers and finished with a wide muslin fabric tacked over the surface. The second floor was established with a vertical board system placed edge to edge and linked with a horizontal board. The mansard roof line was established with curved rafters that projected over the first-floor soffits. The wood shingles were nailed to the rafters and then directly to the vertical boards of the second story. Full-height double-hung windows were capped with eyebrow-arched dormers on all facades (presumably the west dormer was removed with the addition). The building is capped with a low-profile hip roof draining to all sides and was covered with metal sheet roofing.

The first addition to the boarding house was a second story room that caps the kitchen. Still evident is the half-hip kitchen roof that was covered. The structure that covers the kitchen is much more typical of many of Butte’s buildings, with its use of 2 x 4 and wood lath that received plaster. Milled and planed lumber instead of rough-sawn boards also mark this change in construction. Exterior details were also simplified in this capping room addition. About the turn of last century the Victorian-style front porch was added; the dental brackets of the facia board extend behind and are hidden by the porch addition. The turned columns are common to many homes that were influenced by the Queen Anne decorative style popular at the time (1890s). Note that the columns of the porch do not match: the southeastern corner column is slightly different in design and proportion.