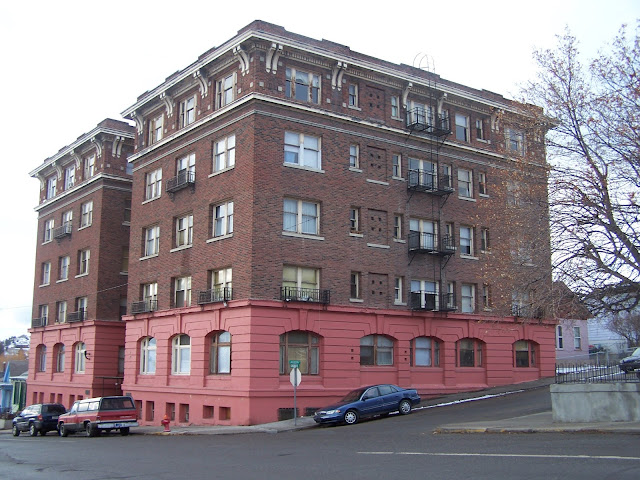 Turn-of-the-century critics called apartment living “a shortcut . . . to the divorce court.” These moralists believed that the proximity of bedrooms to living areas—and the easy access to both by neighbors—encouraged promiscuity, while apartment dwellers’ limited housekeeping duties encouraged a dangerous lack of domesticity among wives. Nevertheless, apartments increasingly attracted middle-class residents, particularly young, childless couples, older couples whose children had grown, and bachelors and working women, who didn’t need as much space as larger families. 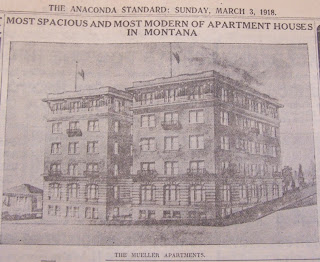 White-collar workers occupied the five-story, fifty-five-unit Mueller Apartments, built in 1917 as an investment by A. H. Mueller, president of Centennial Brewing Company. It cost $175,000 in dollars of the day, and was open for occupancy on March 10, 1918. The building incorporates Italian Renaissance style design elements: a symmetrical façade, a rusticated first story, keystone arches over the first-floor windows, and paired brackets and dentils under the cornice. Stained glass windows decorate the front entrance while a belt course and a distinct window pattern distinguish the fifth-floor penthouse apartments. These elegant, yet restrained architectural details announce the building’s respectability and, by extension, the respectability of its tenants, who included teachers, a doctor, salesclerks, accountants, and business owners.

The Mueller contained 38 two-room and 16 three-room apartments when completed. They included kitchenettes, bathrooms, and a "Murphy-in-a-door" bed. Every apartment had outside windows, and the building's hallways were finished in mahogany. The basement contained a ballroom, laundry facilities, and storage.