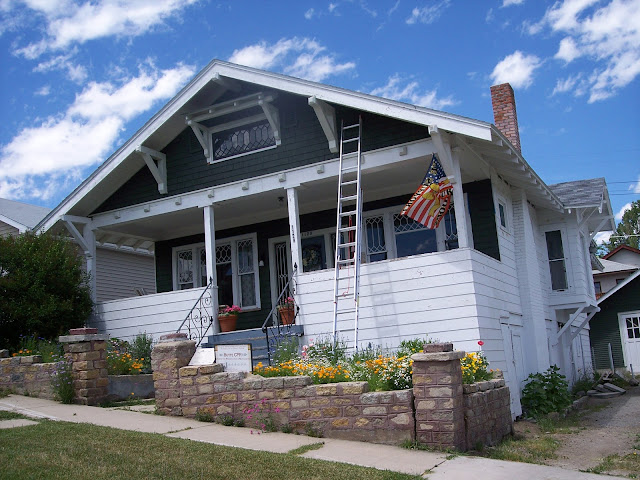 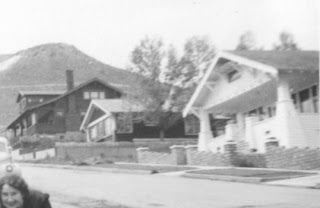 A low-pitched gable roof, open porch, exposed rafter tails, and decorative knee braces identify this well-preserved example of the Craftsman style. Constructed about 1915, the home boasts its original windows, which feature a diamond pane motif and a unique oval-glass door. Built-in bookcases serve as room dividers; oak floors, a beamed ceiling, and a prominent fireplace (sadly, the original ornate mantel was stolen) ornament the living room. Architects lauded bungalow designs for their symbolism and efficiency. Low-pitched roofs gave “an impression of comfort and security.” The central hearth provided a symbolic focus for the family, and the interior use of wood (such as the ceiling beams in this house) brought nature into the home. Although it appears large from the exterior, amazingly, the house was originally built as a one-bedroom home. The front porch is not the original design.

The Butte “granite” rock wall was added in the mid-1930’s. The Lowneys did it: cement mixer going, lights shining, yelling back and forth into the night. The two-car garage was built about 1960 by Marcelano Galetti, who matched the style of the house by incorporating knee braces taken from the house, and salvaged old, unmatched, carriage garage doors. 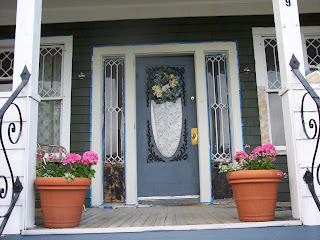 Homeowners like Herman and Barbara Smith, who lived here from 1915 through 1949, embraced the bungalow style. Usually costing between $1,500 and $3,000 to build, bungalows put fashionable homes within financial reach of skilled craftsmen like Smith, who worked variously as an ironworker, ropeman at the Black Rock Mine, contractor, depot supervisor, and salesman. Smith built the house alternately with traveling to the Chicago/Detroit area to work there.

The stocky, bandy-legged, mustachioed Smith could be seen trudging up the hill with his lunch pail under his arm after work. Barbara Murphy Smith was a seamstress and always had a silk handkerchief. David and Jeanette Stuart and family lived in the walkout basement during the Depression in the mid-1930’s. Later owners included Marce and Irene Galetti, their daughter Tiny (Galetti) Lorengo (1949-~1971), and the Ramey family (~1971–2003). The unsolved murder of Mr. Ramey took place in the west bedroom in 1972. The house was purchased in 2004 by Phyllis Hargrave who started the renovation.