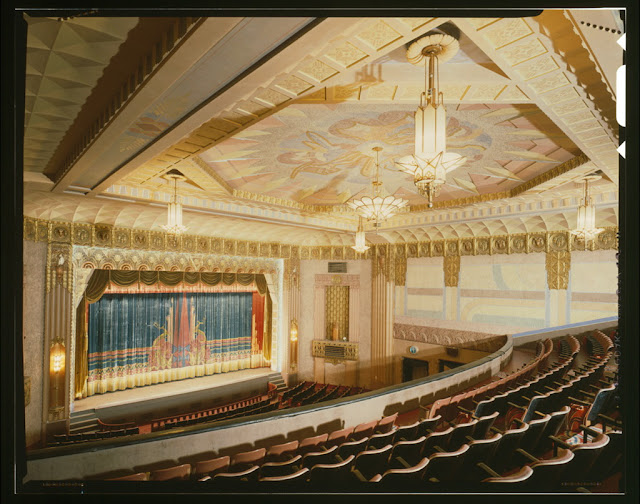 Designed by Scottish-born and Seattle-based architect B. Marcus Priteca (1890-1971), and built by Gus Forseen, Missoula contractor, the Washoe Theater opened to the public on September 24, 1936. The theater's structural architecture and elaborate interior decor are both outstanding examples of the contemporary art deco style. Construction of the 1,000 seat theater began in 1931, and was financed by the Washoe Amusement Company at a total cost of $200,000. Completion of this structure was delayed until 1936, due to financial effects of the Depression.

From the street, the Washoe’s restrained brick exterior gives little indication of the breathtaking splendor that lies beyond the etched glass doors. Hollywood artist Nat Smythe prepared the designs and watercolor sketches for the interior and the original drawings are still maintained by the current owner. Colors of cerulean blue, salmon, rose beige, and yellow are enhanced by abundant copper plating, silver and gold leaf, and ornamental ironwork. Two magnificent stags are hand-painted on the blue silk plush curtain that graces the stage. Aside from the murals, executed by three expert decorators, decorative wall and ceiling work throughout the theater was the work of members of the Painters Local of Anaconda under Smythe's supervision. The applied decor employs pastel colors with eight shades of gold leaf in addition to burnished gold leaf on relief elements.

When first opened, the Washoe employed the latest projection equipment, and was the only theater in Montana to install a Western Electric “Mirrophonic” (stereophone) sound system, first developed in 1933 by Bell Telephone Laboratories. The interior decor also included draperies, a carpet, opera chairs, hardware, and sandblasted glass door panels all carefully selected to compliment the art decor scheme.

Admission for first-run films in the 1930s was thirty-five cents. Today, the Washoe is one of the best preserved theaters in the United States, with original fixtures and equipment still in place and in use. It is all the more remarkable for its Depression-era birth, when movie theaters were built on a grand scale but no longer so opulently furnished.

The Washoe replaced an earlier theater on the same site. The Sundial Theater, originally called the Margaret in honor of Marcus Daly’s wife, was built in 1897 and destroyed by fire in 1929.