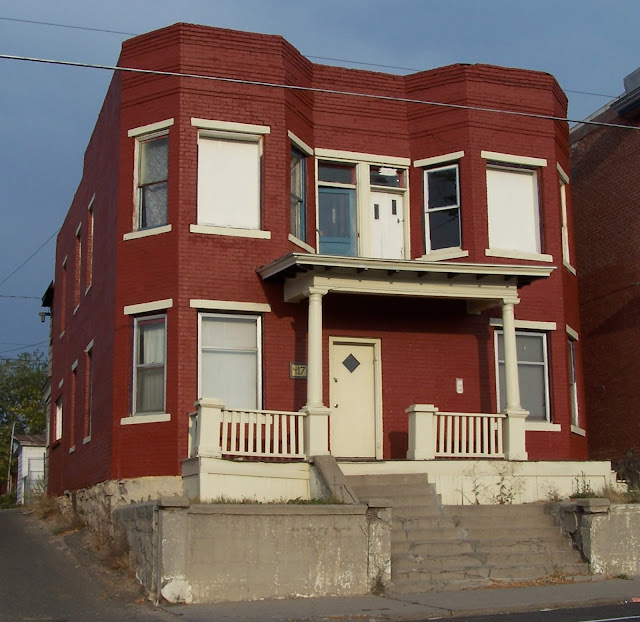 This typical bay-fronted flat was home to controversial Butte author Mary MacLane from about 1900-1909. The structure is largely intact with some modification, damage and deterioration. The front porch is original; the back porch was originally Y-shaped with two independent, two-story porches that had stairs leading to a central platform and then to the ground. The open back porches were enclosed and connected to each level about 1915, when the bath was installed. Designed in the manner of a typical four-unit walk-up flat, this home was constructed as a two-unit duplex with internal stairs. The duplex had a stacked upper and lower unit on the south and an upper and lower floor on the north; the latter was the MacLane home. Mary MacLane was 19 years old and living here in 1901 when she penned her famous diary, The Story of Mary MacLane. Shocking for its day, the diary expresses Mary’s eroticism and strange dreams with remarkable frankness. The book sold 100,000 copies in its first month and was cited by Ernest Hemingway and Gertrude Stein as an influence in their search for a new American writing style.

Many interior changes took place over the decades with the lower floor opened to connect the two original units, forming a first-floor single-family home. The interior stairs were removed but the two second-story units remained, turning the house into a 3-plex prior to the beginning of restoration work. The removal of the internal stairs was a unique form of birth control undertaken by the family—the father was relegated to the south upstairs apartment after supper with doors locked to eliminate his midnight visits and the resulting children. The northern second-floor unit was usually rented at a minimal cost to a handyman or family friend.

This building is not platform framed: its balloon-framed wood 2 x 4 studs are two stories high (or a bit more). It has 2 x 10 joists and a minimal attic with a relatively flat built-up asphalt roof sloped to drain to the back Leaking of the roof has been frequent. The home went through several rounds of tax default and repurchases at tax sales. One of the previous owners thought it would be nice to widen the narrow hallways upstairs by combining them and removed the central bearing wall, a problem that exacerbated the leaking roof. The building was offered and purchased on a county developer’s packet once; those owners defaulted and left town. Ownership returned to the county and it was offered through a second developer’s packet procedure and acquired by Butte historians at a cost of $500. Restoration work is being diligently performed by volunteers and as an internship for the Historic Preservation Technology Program at the College of Technology Program at Montana Tech of University of Montana. In 2012, Butte Citizens for Preservation and Revitalization granted $7,000 as a 50% match to replace the roof.