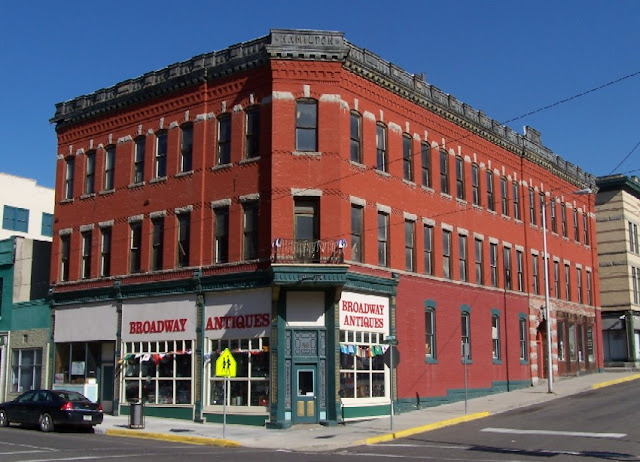 Built for businessman Patrick J. Hamilton, this 52’x100’ three-story brick structure served typical Butte functions: stores on the first floor and lodgings above. The building replaced a pair of two-story restaurants at the corner of Utah (previous name of Hamilton Street) and Broadway, and a Chinese store at 49 W. Broadway.

The iron store-front columns were cast by Montana Iron Works of Butte, located on the edge of Chinatown at 213-215 South Main when the Hamilton was erected. The tin cornice is one of the longest cornices surviving in Butte. Exterior stone sills, lintels, and keystones are likely Butte granite.

The first floor has been somewhat remodeled. Three businesses—from the corner to the west, a saloon, a store, and a restaurant—originally occupied the Broadway Street front, and the hotel entrance was at the middle of the building’s east front on Hamilton Street (the entry archway survives). The first floor was a café prior to occupancy by the antique store, which moved out in 2012. Upper floors are largely intact, though deteriorating, and retain original woodwork and open skylight. Gold leaf formerly decorated picture molding on the third floor.