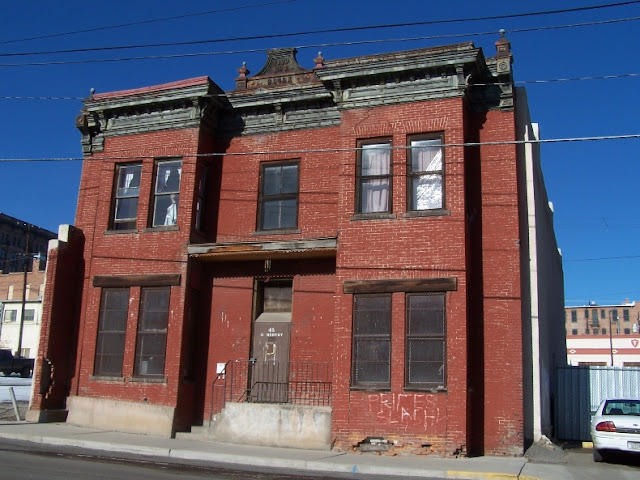 French Canadian brothers Arthur and Joseph Nadeau built this house of prostitution in 1890. Reflecting the architecture of the trade, each room features a door and window so customers could “shop.” In 1900, when Grace McGinnis was madam, the Dumas was in the heart of the red-light district, an area roughly two blocks square and crowded with saloons and gambling halls. Butte’s district was the second largest in the West, after San Francisco’s Barbary Coast. An estimated 2,500 working girls plied their trade in Butte at the peak of population in the 1910s and 1920s. Prostitutes worked everywhere from squalid alley “cribs” to high class “parlor houses” such as the Dumas. Prostitution, although never legal in Butte, was tolerated as a necessity for miners and “gentlemen” alike. The district faded as years passed, but women at the Dumas serviced customers until 1982.

The second-floor hallway is expanded to accommodate a balcony and skylight bringing light to both floors. In 2007-2008, private donations, mostly from John “Curt” Button, allowed Butte Citizens for Preservation and Revitalization to replace the roof and crumbling load-bearing interior masonry. In 2012, new owners began aggressive revitalization and returned the building to use as a viable museum.

More information about the 2007-08 restoration here.