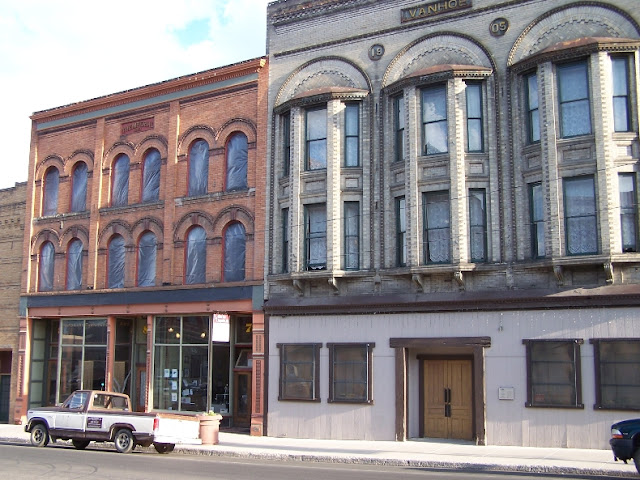 Lawyers Robert McBride and Patrick Talent originally owned this three-story commercial/residential building designed by architect George De Snell. Built in 1905, it was one of several brick buildings that replaced frame stores, liveries, and brothels formerly occupying the street. Charles Cutler’s barbershop and Joseph Boulet’s bakery were early tenants. In 1910, the two opened the Iona Pool & Billiard Hall where Butler continued to give haircuts and sell cigars; Boulet moved the bakery and Iona Cafe to Main Street in 1915. When fire severely damaged the building in 1913, architect De Snell made the repairs and remodeled all three floors. The three tall arched bays, beautiful brickwork, and ornately carved stone on the upper two floors remain intact.

The changing character of East Park Street is well documented in the history of this rooming house, built as an investment in 1900 by Abraham Wehl. By this time, Butte’s first red light district, located on the block in the 1870s and early 1880s, had been firmly re-established to the south on nearby Galena and Mercury Streets. Handsome business blocks like this one, which replaced dilapidated mining camp buildings, brought some measure of respectability.

Records show that residents at the Imperial were primarily miners and others who worked nearby but in 1910 under proprietress Mamie Smith, the fifty residents included nine prostitutes. Prohibition and reforms brought further change to the neighborhood evident by 1920 when Hugh Quinn, a family man with six children, was tenant landlord. His thirty-three roomers were all men (predominantly miners) or couples with children. Like most rooming houses of the time, second- and third-floor lodgings were arranged around a central skylight with ground-floor commercial space. The cast iron storefront, graceful upper-story arches, and decorative brickwork nicely represent turn-of-the-century Butte.