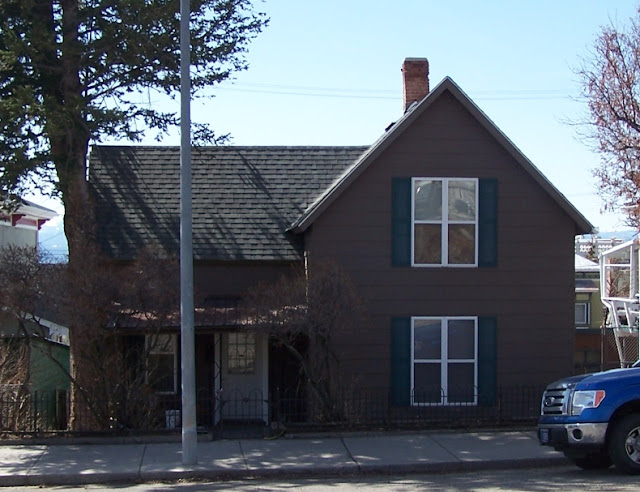 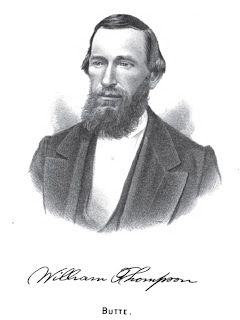 This was William Thompson’s home, built by him circa 1884. He was born in Ontario, Canada, March 1, 1838, was in Virginia City, MT in 1863, and moved to Butte in 1879, the year the city was incorporated. He established the Butte Lumber Yard (219 S. Montana, the entire block between Galena and Mercury on the west side of Montana Street) and by 1891 was Vice-President and General Manager of the Montana Lumber & Manufacturing Company. Together with his sons he started the Thompson Investment Company in 1889, a building company that erected many of the small homes in Butte. He served as Butte’s mayor in 1895-97, and was also a territorial and state legislator, helping draft the Montana state constitution. By 1900, he was living with his son James at 1101 Caledonia. He died May 15, 1900.

Mining claims south of Butte owned by the Thompson family were donated to the city of Butte by Col. William Boyce Thompson, in honor of his father, William Thompson. The son had been raised in Butte and founded the Newmont Mining Co., a global mining company still in existence today. Thompson Park was officially designated as a park in 1915.

The street face of this house retains its original geometry, including the porch.

Resources: Architectural inventory; Sanborn Maps; city directories; Thompson Family History; and “2012-07-26 Thompson Park Grand Re-Opening,” by US Forest Service. Image of Thompson from History of Montana, 1739-1885, by Michael Leeson (1885). Photo by Richard I. Gibson.
Posted by Richard Gibson at 9:11 AM