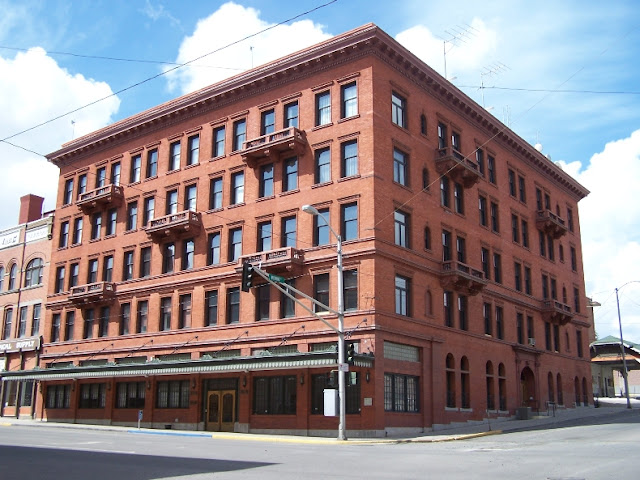 Beautifully detailed and thoroughly cosmopolitan, this $75,000 five-story hotel opened May 5, 1901 featuring over one hundred rooms, a saloon, restaurant, barber shop, and bowling alley. A cast-iron and glass entrance canopy, stone balconies, Tudor arches, and decorative carving highlight the elegant exterior. Turn-of-the-twentieth-century hotel patrons, no doubt impressed with Butte’s metropolitan character, could even take an electric street railway direct to Sutton’s Broadway Theater. After 1947, the Thornton Block served for many years as a club for Anaconda Copper Mining Company employees. In 2013, this office building also houses Montana’s supercomputer in the basement, where the heat generated by the electronic equipment provides significant energy savings, making this one of the greenest historic buildings in the state.

In 1914, room 207 in the Thornton was the Headquarters Office of the Montana Equal Suffrage Association, with Jeanette Rankin as Chairman. (See the Women's History Tour on HistoryPin.)