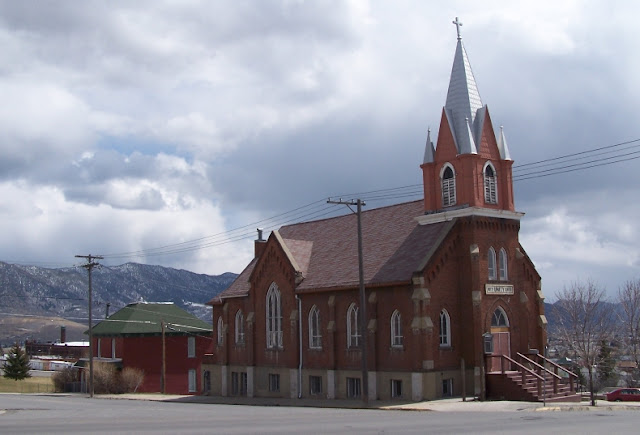 Immigrants to Butte during the mining boom often lived, socialized, and worshiped with fellow nationals. Swedish Lutherans first congregated in 1896, and in 1901 they built a small wooden chapel on the back of this lot. They quickly outgrew the building, which was a mattress factory when it burned in 1937. In 1912, the congregation, which kept its early records in Swedish, began construction of this brick church at a cost of $15,000. It was completed and dedicated in 1916.

Modest compared to neighboring St. Mark’s (a German Lutheran church), Emanuel Lutheran’s most prominent feature is its octagonal spire, which rests on a wooden tower ornamented with pinnacles and projecting gables. The steep pitch of the gables, lancet-arched tracery windows, and diagonal buttresses capped with contrasting sandstone trim all mark the church’s design as Gothic Revival. Butte Unity Truth Center, a nondenominational Christian church, purchased the building in 1958 when Emanuel Lutheran followed its congregants to the flats. By then Emanuel Lutheran no longer exclusively served Swedes; its days as an immigrant church—bringing comfort to worshipers far from home—were over. The Unity Center continues to use the building in 2013.