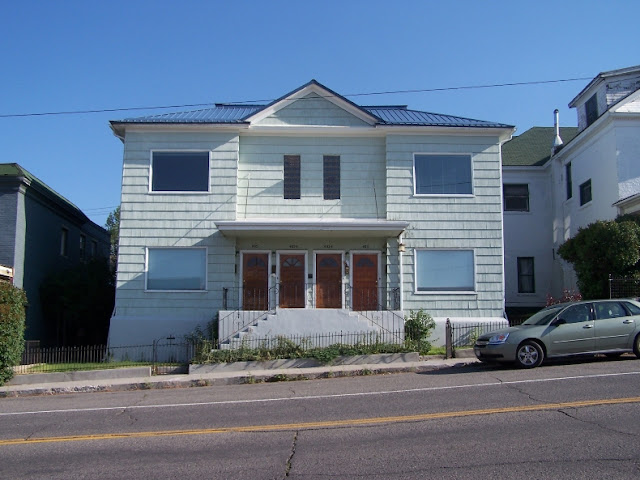 Hardware merchant William M. Jack built this two-story dwelling circa 1890. Scottish-born Jack was a dealer in hardware, tinware, stoves, pumps, and mining equipment. A collection of several outbuildings, a small house, two large warehouses for stoves, and an underground stable covered the site in 1888. Jack razed these utilitarian buildings and replaced them with much more attractive housing for himself and a tenant. Jack soon moved on, but over the next decades, the building served several purposes. By 1916, it had been converted to housekeeping rooms to satisfy a greater need for housing as the copper industry boomed.

In the 1920s, physician Neil O’Keefe and dentist John F. Kane had their offices along with Ingersoll-Rand mining machinery at 403. The United Press Association occupied the other side at 405. During the 1930s, the building again provided residence housing, this time for the Hubert Neal and Leonard Backstrom families. Originally clad in brick veneer, the double dwelling has long been divided into four apartments. Residents access the two halves though central doorways opening onto a shared porch.