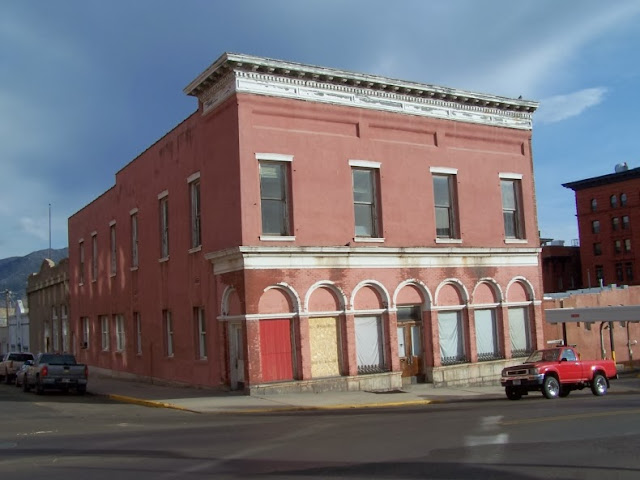 In 1884-85 the building was occupied by Hoge Brownlee & Company Bank in the northwest corner of the first floor; the rest of the first floor contained W. R. Kenyon & Company Hardware & Mining Machinery. It had a stone basement with its own boiler in the southeast corner of the basement. The building was owned by Marcus Daly in the mid-1880s and later by Donahue & Moyer; in 1900, the Daly Bank & Trust Company owned and occupied the building. John D. Ryan was bank president and John R. Toole served as vice president. This is the location where Ryan, later president of the Anaconda Company as well as the Montana Power Company (see this link to his house) became acquainted with Marcus Daly.

By 1908, this block was owned by and housed the Anaconda Copper Mining Company’s pay office. Also known as the Mines Office (first floor rear), it also contained the ACM purchasing department on the second floor. In later years, the telephone switchboard and operators were located on the second floor at the rear of the building.

By the 1950s, the ACM still used this building for offices, but the pay office had moved around the corner to the adjacent building to the east (18 E. Quartz St., at left in photo at top).

During the labor troubles of the 1910s, the pay office was dynamited Sunday, July 6, 1919. “Little damage was done,” according to the Engineering & Mining Journal, but the New York Times reported “an iron grating was blown against a building across the street, narrowly missing a street car heavily loaded with miners. The damage is estimated at $5,000.” Windows were broken in 6 nearby stores.