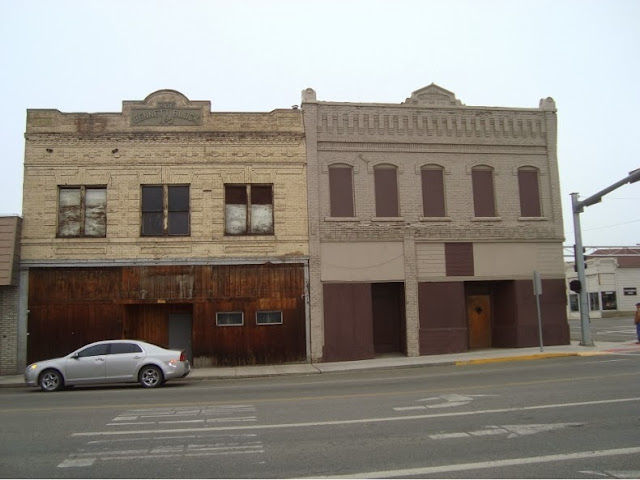 The intersection of Utah and Front Streets in the 1880s and early 1890s was the heart of South Butte,  a separate town with its own address scheme and population count until the mid-1890s. Front Street was the embarkation point for many travelers, with the Montana Central Railroad just south of the warehouses on the south side of the street. In 1906, the Northern Pacific Depot was completed across the street from these two buildings, and still stands. The area was platted in 1881 as the Noyes & Upton Railroad Addition.

In late 1888 Bennett Block #1 (at right in photo at top) was constructed. Willard Bennett lived in Deer Lodge but was owner of the building and Vice President of Bennett Brothers Co., a dealer in agricultural implements, carriages, wagons, and produce. In addition to the store and office here, they had a large warehouse across Front Street as well as a store at 124-128 East Park in another “Bennett Block,” also known as the Willard House (lodgings) and (on the Arizona Street side) the Nelson Block. A saloon of various names occupied part of 128 E. Park for many years—from about 1901-1910 it was called The Council. The southwest corner of Park and Arizona is mostly a vacant lot today, with a small vacant spa store.

Bennett Block #1 in 1890 contained a general store, a cigar and stationery store, and the South Butte Post Office.

In 1890, a two-story building to the west was completed. It held a gambling hall and saloon. In 1906, as reflected in the year emblazoned on the parapet, a new building was erected there, Bennett Block #2 (left in photo at top). By 1908, the two Bennett buildings together comprised the Bennett Hotel, with “transients solicited” to enjoy electric lights, steam heat, stationary basins, and baths. The ground floor continued to serve as retail space, including a drug store and a restaurant.


The ghost sign on the back (north side) of Bennett Block #1 reflects the 1920s grocery store that was in the easternmost retail space. The Stilwell Grocery was owned and operated by Elias (President) and Roy (Vice President) Stilwell. They lived with their wives Olive and Rita at 2710 and 2802 State Street, respectively (the Floral Park neighborhood). In 1928 when the Stilwell Grocery was on the ground floor, the upper level continued as the Bennett Hotel, managed by Mrs. Agnes Brady.

By 1944 Block #1 was owned by Harry Brinck, the Montana state distributor for Rock-Ola phonographs, amusement games, and novelties. His long tenure there, into the 1970s, gives the common name to the building today: Brinck’s. Block #2 for many more recent years served as the Deluxe Café and Bar, and was still in use in 2012.

The city and county of Butte-Silver Bow inherited the Brinck’s building on unpaid taxes in 2009. Although offered to developers twice, no one took the property. Demolition was planned, but that was tabled in 2011 when it was discovered that the Deluxe, which was still in use next door, used as one of its walls the original west wall of the Brinck’s building. The Brinck’s was ordered to be mothballed by the city in September 2011, but a required roof or roof patch was never done, and in May 2012 the city declared it a safety hazard and planned again to demolish it. The problem with the common wall continued to be an issue until the city paid the owner of the Deluxe $40,000 to purchase it so that both buildings could be demolished. The pair was offered again on developers’ packet in 2013, but the two expressions of interest were deemed to be incomplete or untimely. As of November 2013, the city awaits an asbestos abatement analysis and plans to demolish both buildings.