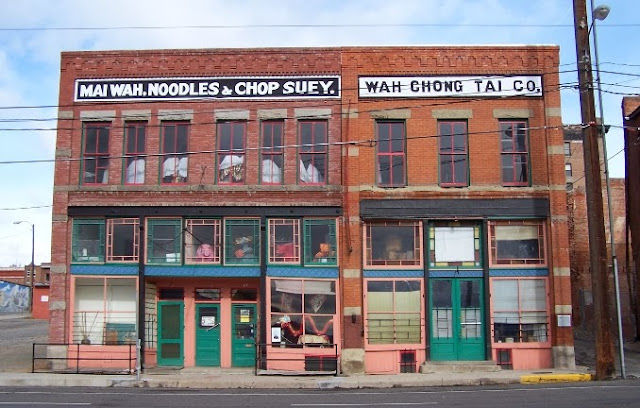 About 1893, Chin Chun Hock, the founder of Seattle’s earliest and most successful Chinese mercantile business, the Wa Chong Company, opened a branch store in Butte on West Galena Street. Chin visited Butte in October 1898, and announced plans to construct a new building for the company on China Alley at Mercury Street.

By 1899, the company had moved into the new, two-story brick building at 15 West Mercury. Architecturally, the Wah Chong Tai (literally announcing beautiful old China) Company’s new building was no different than the other business blocks being constructed in other parts of Butte City. The mercantile operated from a large room on the first floor, stocking items imported from China to sell to Asians and to others. Merchandise included fine Chinese and Japanese porcelain, bulk containers of dried herbs and tonics, and string-tied packages of Chinese-style clothing.

An herbal store at the back of the mercantile was named “hung fuk hong” or “together happiness meeting place.” An open mezzanine around three sides of the mercantile provided additional display space and an area for two offices. A restaurant was located on the second floor. Restaurant customers, both Chinese and Euro-American, entered by a door on China Alley.

Just as rural general stores throughout the U.S. provided various services, the mercantile also did much more than just sell goods. Besides its obvious commercial activities, it was also the place to find lodging, social interaction, and job opportunities. The mercantile was a meeting place, a post office, and a bank. It also had political functions, providing translators and spokespersons who represented the Chinese within the larger society.

For several decades, the Wah Chong Tai Company remained a thriving mercantile. By 1931, ownership of the building and business had passed from control of the Seattle company and the real property had been divided into 1/20th shares under eight different owners, and the Wah Chong Tai Company was a partnership divided into 1/15th shares with five different owners. Three of the owners, Chin On, Chin Yee Fong (Albert Chinn), and Lou Dick You lived in Butte while Chin Quon Dai and Kong Sing Fong lived in China.

A "Report of the Partnership" filed with the District Court on the death of Chin On showed the company in sound financial condition at a time when many other Chinese businesses in Butte were being forced to close. The partnership listed assets of almost $10,000 -- three quarters of the amount was in cash. The report also verifies the Wah Chong Tai Company's function as a bank for local Chinese. It listed over $12,000 in a safe deposit box at the First National Bank being held in trust for 15 individuals.

In 1909, the Wah Chong Tai Company retained George DeSnell, a Butte architect, to design a new building to adjoin the mercantile. The two-story brick structure has two storefronts at street level separated by an entrance to the second story Mai Wah (meaning “beautiful and luxurious”) Noodle Parlor.

At least one of the storefronts was divided from front to back into a series of small stores accessed off an interior side aisle -- a small version of today’s shopping mall. An unusual feature of this building, but one that is common in Victoria, British Columbia's Chinatown, is a "cheater story," a floor sandwiched between the first and second stories. Divided into a number of small rooms and with only about six feet of headroom, it apparently accommodated lodgers.

By the mid-1940s, only a few Chinese families remained in Butte, among them the Chinn family who owned and lived in the Mai Wah Noodle Parlors and Wah Chong Tai Co. buildings. By 1949, William Chinn, Albert Chinn’s son, owned the building. He rented the building to Paul Eno who ran a fix-it shop and second-hand store from the ground level until his death in 1986.

Hal Waldrup, a friend of Eno, recognized the historical significance of the buildings and was crucial in organizing citizens to help preserve and restore the buildings. Waldrup arranged for many Chinese artifacts and photographs from the building to be transferred to the Montana Historical Society in Helena.

Modified from text by Richard Gibson on Mai Wah website, where more information and historic images can be found. Note that the historic plaque indicates that the Wah Chong Tai building was constructed in 1891; this is incorrect; it was planned in late 1898 and erected in 1899. Photo by Richard I. Gibson.
Posted by Richard Gibson at 10:05 AM