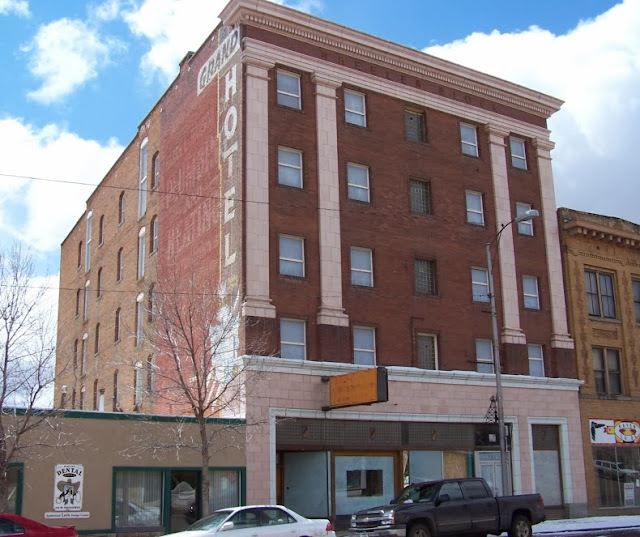 The building known as the Grand Hotel began as a three-story labor temple in 1915-16, intended to be a meeting place for plumbers and other unions. To cover debts, the unions sold it to Butte lawyer and U.S. District Attorney (later U.S. Senator from Montana) Burton K. Wheeler, who added two stories by the time it was finished in 1917.

The façade is marked by terra cotta tiles and cornice, dressed stone columns, and decorative prism glass bricks in the transom level and in the central stair windows. Others managed the Grand Hotel for Wheeler for about 15 years until he sold it, but it continued as a hotel until 1989. A dance school conducted classes here in the early 1940s.

A promoter bought the Grand in 1989 and began to develop it as a boxing training center, with lodgings on the upper floors. In the summer of 1991 fireworks started a fire that was quickly controlled, but the following January a fire consumed most of the fifth floor and destroyed the roof. The building stood empty for about three years and reverted to the city-county of Butte-Silver Bow for unpaid taxes, and a new roof was installed. Various owners had it until 2011 when Chuck and Lyza Schnabel purchased the building and renovated the basement for the Quarry Brewery and tap room, which opened on Sept. 29, 2011. The ground floor was renovated in 2012-13. Plans for the upper floors include bed and breakfast, condos, and private usage.

Note: the photo above is from 2011 before three new store fronts were renovated on the ground floor.