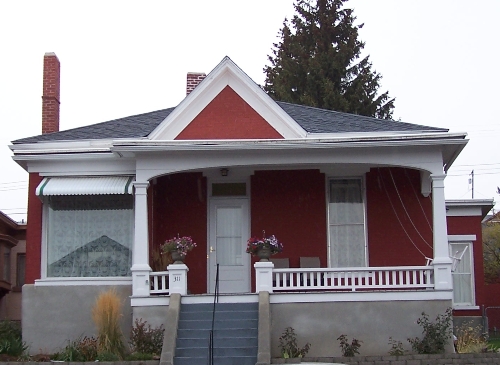 A gentle arch, a simple balustrade, and a pair of sloping columns frame the entrance of this quietly elegant residence dating to the mid-1880s. An exceptional example of the hip-roofed cottage with a central gable, the well-preserved Victorian-era home appears much as it did when first owned by druggist Harry D'Acheul.

Unlike other homes in the neighborhood that share its architectural style, the fine interior furnishings here indicate that the residence was custom-built and not originally intended as a rental. An arched entryway, a square bay framed in decorative wood, and an ornamental ceiling medallion grace the formal dining room while original six-inch woodwork remains intact throughout. Also unusual for its size are the four chimneys, which serve a living room fireplace, a woodstove, the furnace, and the kitchen. D'Acheul, who lived here until the mid-1890s, no doubt found this location convenient to his wholesale and retail business at 32 North Main.

For most of its existence this house had 313 as its address. Some time after 309-311 West Granite became a single residence instead of a duplex, this one carried the 311 address as it does today, and there is no 313 West Granite now.