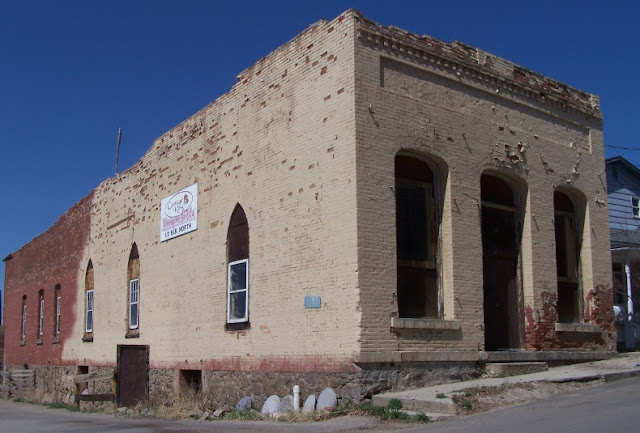 Once among the largest commercial buildings in Walkerville, this building was built before September 1884 by John Caplice and Alfred McCune to house one of their general stores and groceries, to serve Walkerville at a time when its population was about 900, with another 1,000 or more likely in the immediate vicinity beyond the town limits.

For more on Caplice and Company, please see these three Butte History articles.

In 1900, the building was serving as St. Joseph’s Catholic School, with Revered Francis Batens in charge. Sister Mary Cecilia was the “superioress,” and the school had seven teachers in 1904. St. Joseph's school relocated to California and First Street by 1908, to be nearer St. Joseph's church. By 1906, this building was in the hands of the Methodists, used as Mt. Bethel Methodist Episcopal Church—they moved from 123 Clark in Walkerville. The pastor lived in a separate section in the rear, which is part of the original 1884 building. The Mt. Bethel congregation was organized in 1884, and in 1910 it had 40 members (compare Mountain View Methodist at 400 members in 1910). This space continued to serve as Mt. Bethel church until 1972. Since then, it has been used sporadically for various purposes, including fireplace hearth manufacture.

The brick is laid in American bond. The building has a stone basement and is vacant in 2013. The lancet windows are likely early renovations dating to its use as a parochial school or the church. The address here is sometimes given as 1609 N. Main.

Posted by Richard Gibson at 1:22 PM