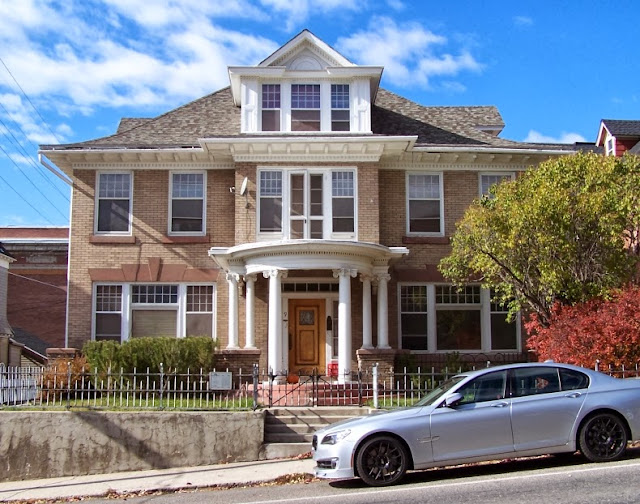 A graceful rounded portico with Ionic columns and a central square bay with French doors highlight the perfect symmetry of this grand Classical Revival style residence of tan brick veneer and red sandstone trim. Elegant details include elaborate brackets, dentils, a round window, and full-width veranda. Classical harmony carries through to the interior in a perfectly symmetrical floorplan. Fine turn-of-the-century appointments include a dining room with the original leather-clad walls, inlaid oak flooring, and pocket doors throughout the first floor. Local contractor Byron Whitney built the home circa 1908 for the William Symons family. Symons, with his brother Harry, founded Butte’s premier department store in 1897. Wholesale grocer Charles Youlden was the next owner from the mid-1920s until his death in 1940. Among his many philanthropic and civic contributions, Youlden was the longtime director of the YMCA. The prestigious, well-maintained home remains a prominent Butte landmark and attractive neighborhood anchor.