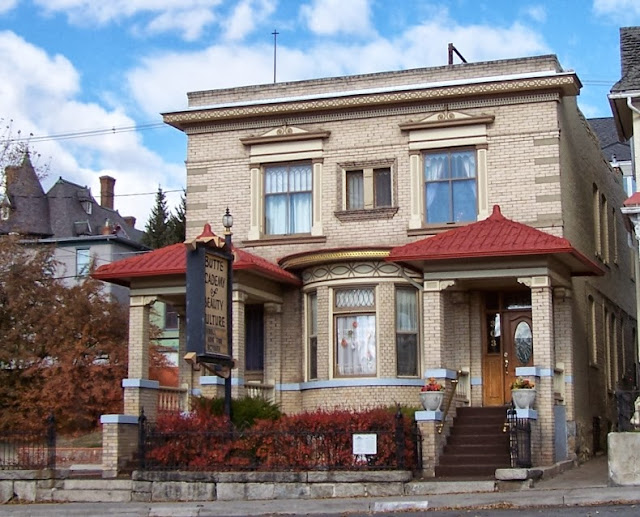 Historic maps reveal that this magnificent Renaissance Revival style building had rather humble beginnings. From 1888 to 1900, a one-story frame dwelling with a simple open-air porch spanning the front occupied this site. By 1916 the residence had received a second story and a covering of brick veneer. A handsome semicircular central bay flanked by square entrance porticos with hipped tiled roofs, elaborately detailed windows, scrolled brackets, and a decorative cornice are exemplary of the style. Butte businessman Thomas Lavell, whose home was next door at 301 West Park, was the building’s longtime owner/landlord and likely responsible for its splendid makeover. Tenant Jeremiah Flanigan, cigar dealer and vice president of the Rocky Mountain Bottling Works, lived here from 1906 to circa 1915, when the house was still a single-story residence. His household included daughter Margaret and a live-in servant. Today this neighborhood landmark appears much as it did in the 1910s. Recent efforts to restore the original interior grandeur include reproduction of the original oak wainscoting and crown moldings.