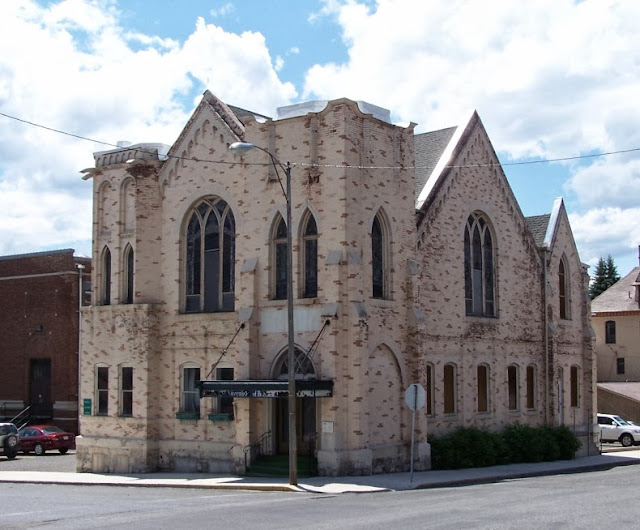 Noted architect William White designed this majestic, multi-gabled church of stone and brick, built at a cost of $10,000 in 1899. Gothic lancet windows, stained glass, Romanesque arches, and wood tracery in the gable windows showcase White’s meticulous attention to fine detail. A steeple above the entry and pyramidal roof once crowned the two corner towers, visible in the 1905 sketch. Architect White was in partnership with A. Werner Lignell in 1900; their offices were in the Silver Bow Block (the old one, where the parking lot stands today just west of Main on Granite Street). In 1901 White’s independent office was in the Bee Hive Building on East Broadway (part of the NorthWestern Energy buildings today) and he was living at 1035 Caledonia.


By 1918, the church was owned by mortician (and later Silver Bow Sheriff) Larry Dugan, a sympathizer with the incendiary Industrial Workers of the World (IWW). The building then housed the Butte Daily Bulletin (later known as the Butte Strike Bulletin), a radical newspaper voicing policies of the anti-Anaconda Nonpartisan League, published by William F. Dunne. On September 13, 1918, local police and federal troops under Major Omar N. Bradley raided the Bulletin, arresting twenty-four men and thwarting a miners’ strike.

It is likely but not certain that the stained glass windows were fabricated by the Butte Art Stained Glass Works. By 2013, the windows had been covered to help protect them, and in 2015, Uptown Works received a $5,000 grant from the Montana History Foundation to restore them.

In later years, Larry Dugan operated his mortuary here, and more recently Beverly Hayes ran a bridal shop in the building. The owner today is slowly restoring it.