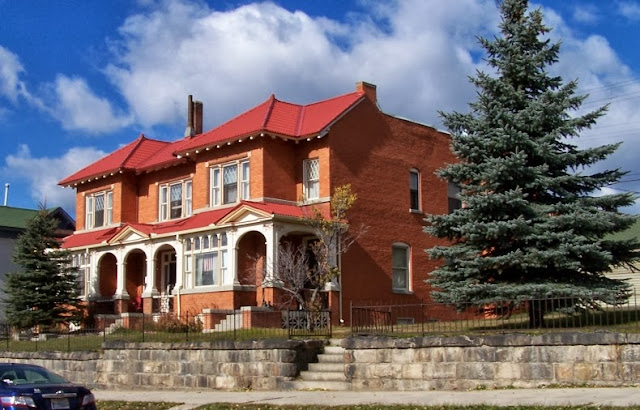 Patrick A. Largey, Butte’s “fourth copper king,” got his start freighting goods into early-day Virginia City. After he settled in Butte, Largey’s many business interests included founding both the Inter-Mountain newspaper and the State Savings Bank. The Largey family, whose opulent mansion once stood next door on the corner, suffered a tragedy in 1898 when miner Thomas Riley murdered Largey at his bank. Riley had lost a leg in the cataclysmic 1895 explosion in Butte’s railroad yards that claimed 58 lives. Because Largey’s hardware company owned one of the buildings involved in the blast, Riley held Largey responsible for his injuries. The Largey family built these flats in the 1890s where many of Butte’s wealthier families stayed while looking for permanent housing. Built by contractor Moses Bassett, the stunning multi-family residence is styled after an Italian villa with tile roofs, portico, and arched entrances. Egg-and-dart moldings, corner window tiles, garland reliefs, and stained and beveled glass embellish the façade. Each of the three, two-story “townhouses” is exquisitely finished with rich wood wainscoting and an oak staircase.

The Largey home itself, much grander than Largey Flats, stood to the east until it burned down about 1965.