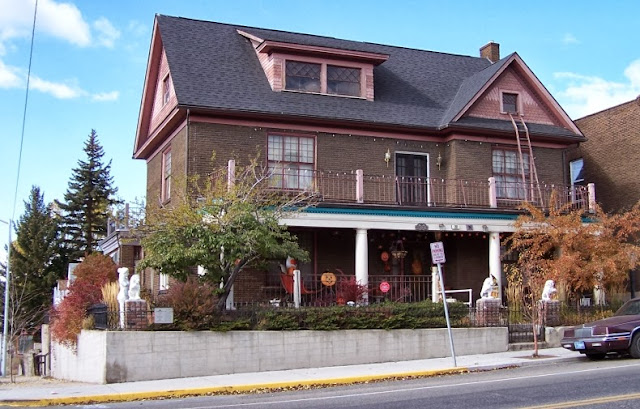 John Scovil worked as a watchman for the Anaconda Company after he first arrived in Montana in 1884. He opened a laundry in 1894; six years later he purchased the Union Laundry in Butte. By 1911, Scovil and a partner owned almost all of the laundries in Butte and employed approximately 175 people. Scovil also invested widely in real estate. He built this two-and-one-half-story monument to his success, along with the duplex next door, in 1917 for the considerable sum of $19,800. Behind the residences was a two-story garage with an apartment on the second floor. The elegant garage may have reflected John’s wife Lalia’s interest in motoring; Lalia was thought to be the first woman in Montana to own and drive her own automobile. A dark brown brick veneer and repeating architectural details visually connect the three buildings. Lalia assumed presidency of the Scovil-owned Taylor Laundry Company after John died in 1925, remarrying in 1927. She continued to live here with her second husband, attorney Laurence Myers, until her death in 1942.