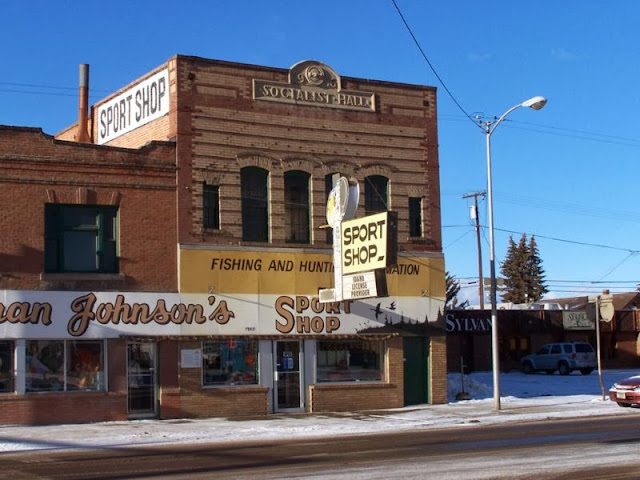 Hands and forearms clasped in solidarity symbolize a movement of local and national significance during the first decades of the twentieth century. One of the few socialist meeting halls remaining in the United States, the building is a monument to a turbulent era of labor unrest and political action. Socialists in Montana played an active role in forcing mainstream politicians to consider labor reforms. At the turn of the twentieth century, the Anaconda Copper Mining Company dominated Montana politics, much of the economy, and nearly everything in Butte, personifying all the negative aspects of the capitalist system. Butte, known as the “Gibraltar of Unionism” with its huge working class, was thus central to the socialist movement. 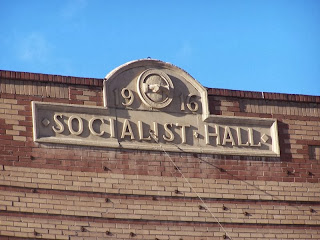 Members constructed this hall in 1916. It was the heart of socialist activity in Montana, housing the Socialist Party of Montana, the Butte Local, and the Butte Socialist Publishing Company. World War I hysteria prompted Montana to enact the nation’s most stringent measures to suppress radicalism and dissent. The Socialist Party suffered severely. In 1920, it deeded the building to the Bulletin Publishing Company, whose Butte Bulletin, edited by electrician and radical unionist W. F. Dunne, carried on the party’s principles by supporting the Non-Partisan League. Dunne lost the building to taxes in 1924 and the Bulletin ceased publication. Socialist Hall, with its rallying inscription “Workers of the World Unite,” is a poignant reminder of the efforts to create a “cooperative commonwealth” and the solidarity engendered by the Socialist Party of Montana.

Although the building is outside the boundary of the Butte-Anaconda National Historic Landmark District, it is officially a part of it, and it is also an independently listed National Register property, one of only 15 in Silver Bow County. Fran Johnson’s sport shop has occupied the building for many years.