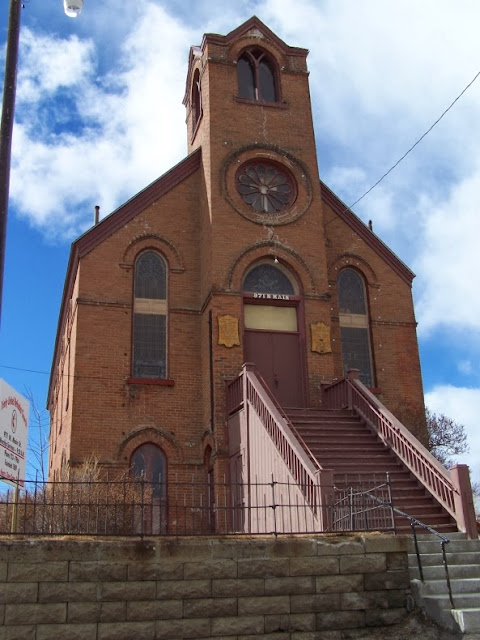 Thousands of skilled miners from Cornwall, England, immigrated to the United States in the mid-nineteenth century as English tin and copper mines played out. Many settled in Butte’s working-class communities. Centerville was home to equal numbers of Cornish, who were mostly Methodists, and Catholics from Ireland. There were two sets of businesses and two churches—one serving each group. By 1884, Centerville’s Cornish residents had formed a Methodist congregation; in 1885 they met in a small frame building on East Center Street.


During the pastorate of Rev. Joel Vigus, the Butte and Boston Mining Company donated the land and this church was built in 1889. Together with the 4-room parsonage, the church cost $4,000, including electric lights donated by U.S. Senator (1895-99) and former Butte mayor Lee Mantle. Workers added brick veneer, a vestibule, a choir room, and dug a basement to accommodate a fellowship hall; all the extra work added about $5,000 to the cost, and the church was finally dedicated in 1896. The original stained glass windows were presented by M.J. Connell, a prominent Butte store owner. More recent stained glass windows are all dedicated, including some as recent as 1955. Much of the glass is of the opalescent variety.

An enduring Cornish tradition is the pasty, a meat pie in a pastry envelope. Carried underground in dinner pails, miners lovingly called it a “letter from ’ome.” Trinity’s fellowship hall hosted many pasty dinners. The simple Gothic style “miner’s church” (in contrast to the “mine owners church, Mountain View) with its sturdy central tower recalls the Cornish miners and their families, far from home, who worshiped here.

Resources: Historic plaque by Montana Historical Society; Historic Stained Glass in selected houses of worship, Butte, Montana, by Richard I. Gibson and Irene Scheidecker (Butte CPR, 2006). Photos by Richard I. Gibson (the photo through the cracked Mountain Con window won an honorable mention in the National Park Service National Historic Landmarks photo contest in 2007-8, and was published as the 13th month in their 2009 calendar).
Posted by Richard Gibson at 12:37 PM