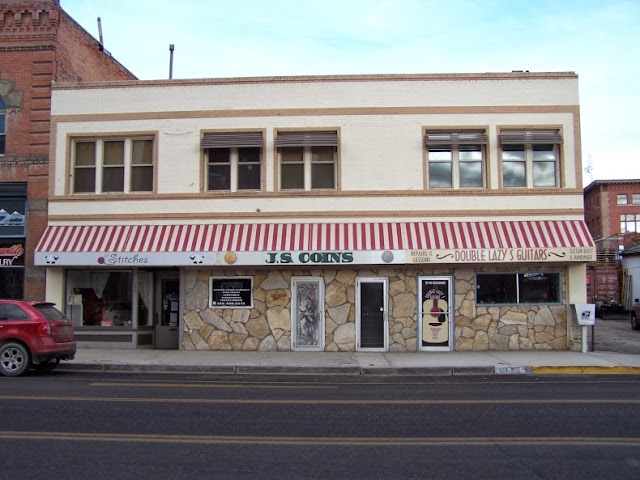 This building originally contained three store fronts on the ground floor and five apartments upstairs. The Butte Miner newspaper used this building (mostly the middle office, 125 W. Broadway) as its primary corporate office, serving the larger, 5-story Miner Building to the east on Broadway, where editorial offices and presses were housed. The Miner had been at this location since 1902, but the 1902 structure here was replaced by this building in 1916. After W.A. Clark died in 1925, his son, W.A. Clark, Jr., fought the Anaconda Company and his own relatives for three years over ownership of the Butte Miner and other Clark assets. But by August 1928 he lost that struggle, and the Anaconda Standard took control of the Butte Miner. The new combined newspaper became the Montana Standard.

125 W. Broadway became home to the Goodyear Shoe Company, while 121 W. Broadway (right side in photo above) held Mother’s Way Bakeshop for many years in the 1920s and 1930s. The western storefront, 127, was a hairdressing salon. Later tenants included S. J. Perry’s first Uptown office in 1939 and the Christian Science Reading Room from about 1954 to 1981. An adult bookstore occupied the building from 1982 to 2012. The second level apartments (123 W. Broadway) contain interesting Craftsman-style columns in the main rooms, and to save space, beds roll out from under closets and bathrooms.

New owners as of 2012 have renovated the building, returning the ground floor to three store fronts and revitalizing the upstairs apartments. The stone front seen in the photo above dates to about the 1980s.

Resources: Architectural inventory, 1928 newspapers, Sanborn maps, city directories. Note that city directories assign various offices of Clark businesses (Timber Butte Mill, Elm Orlu Mining, Street Railway, and others) to this address, but they were actually in the Miner Building a half block east. The story of Montana's newspapers and their relationship to the Anaconda Company is told in Dennis Swibold's Copper Chorus (Montana Historical Society Press, 2006). Photo by Richard I. Gibson.
Posted by Richard Gibson at 9:14 AM