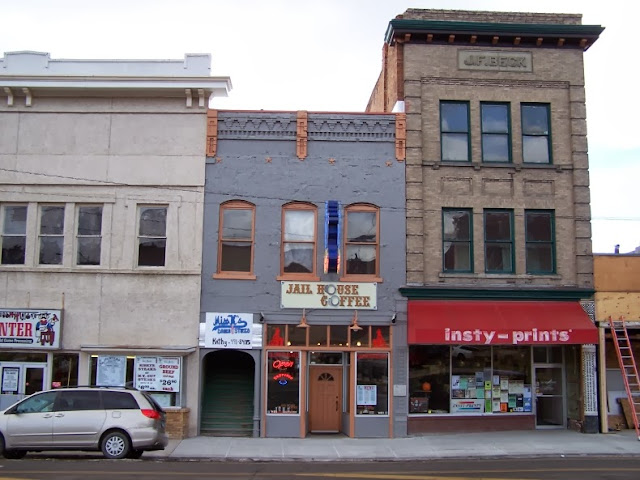 By the early 1880s the railroad linked Butte to the outside world and the town had established itself as a mining camp with a great future. One of the few standing structures from the formative era is this masonry, two-story landmark (center of photo above; Jail House Coffee Shop). Under construction in 1884, it housed the first official city administrative offices. Included among these were the jail and a courtroom. Although the height of the second-story windows has been reduced, the upper portion of the building appears as it did in the 1880s. Ornate details along the parapet of angled and corbelled brick reveal the excellence of Butte’s early brick masons. After 1890 city offices moved, and the façade was modified to accommodate commercial space. The original stairway at the east end remains intact.

Although this was the first city hall, the jail here was the second city jail. The pre-1884 jail was located on Jackson Street, between Park and Galena. It was the far west edge of town at the time.

Source: Modified from historic plaque by Montana Historical Society. Photo by Richard I. Gibson.
Posted by Richard Gibson at 12:01 PM