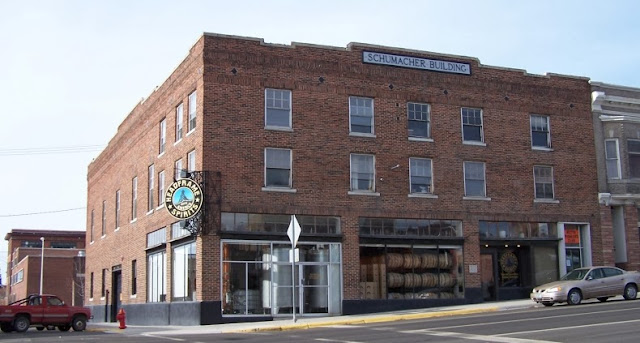 In 1919 H.J. Schumacher had this 36x32-foot business block constructed as a showroom and garage for the Buick Motor Company. It replaced two 2-story duplexes on Montana Street and a single-story home on Galena. Arnold & Van House architects designed the building and the construction contractors were Kroffganz & Frank. The roof was erected by Carlson & Manuell, contractors noted for their heavy girder work at the Park Street YMCA and elsewhere. The building featured a second-story dance hall which was promoted as the largest in the state, accommodating 400 people on the dance floor, and including a gallery of tiered seats, cloak rooms, and restrooms for the patrons. The hardwood flooring in the dance hall displays the fact that the building is not quite square, like many uptown Butte buildings where streets don’t quite follow property lines that are sometimes along old mining claim boundaries. The dance floor is supported by huge metal turnbuckles that are exposed in the ceiling of the ground floor.

Over time the building saw various uses. In 1928, Schumacher had a meat store across the street (listed as 20 S. Montana, but there is no such address; his meat market was at 222 East Park in 1910, when he lived with his wife Jennie at 736 S. Wyoming) and lived in the upstairs apartment here (21 S. Montana) and managed the Rosemont Pavilion, as the dance hall was called. The building was still an auto sales and service center in the 1950s, with a wholesale tire dealership on the second floor. More recently the block was home to the Pioneer Club (which owned the building from the 1940s until 2010), City Vac and Sew, and Schulte’s Glass. In 2011 John and Courtney McKee renovated the building and in early 2012 opened Headframe Spirits, a boutique distillery, whose products bear names of Butte mines. Destroying Angel whiskey reflects the fact that the building stands on the western limit of the interesting Destroying Angel claim. The dance hall upstairs continues to be used for events.