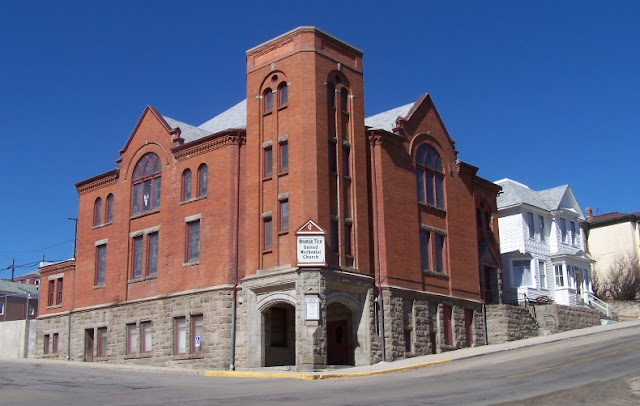 Rev. Hugh Duncan, a circuit-riding minister, led Butte's first Methodist Episcopal services in 1873. A dance hall, and later a school, served the early congregation. W.A. Clark was president of the original board of trustees for the previous church built on this prominent corner in 1883. Clark later became identified with St. John’s Episcopal Church. 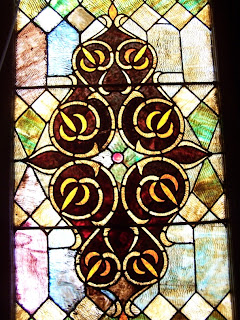 The church, completed in 1900, features a regal central tower with two arched entries. Magnificent stained glass richly embellishes the triple-arched windows on the south, north, and east. The sanctuary's semicircular arrangement and slanted floor, reminiscent of period opera houses, hosted some memorable community events. Famous speakers included social reformer Jacob Riis in 1906 and saloon-smasher Carrie Nation in 1910. Among Butte's eight Methodist churches, Mountain View was the "mine owners' church." Mountain View has hosted multiple choirs over the years, utilizing one of the most spectacular organs in the Pacific Northwest, installed in 1949 at a cost of $12,000.

The stained glass here was very likely manufactured by the Butte Art Glass Works, although the windows are not signed. Their textured surfaces, created by “rough rolling,” are typical of the Butte factory, and were intended to give depth and increased scattering of light. Two more recent windows were made by J&R Lamb Studios of New York.